3 This Chevrolet Impala Was Both a Hearse and an Ambulance, Still Has the Siren

After a 33-year absence, the Roadmaster nameplate returned to the Buick lineup for the 1991 model year in the guise of a four-door sedan and a family-sized wagon. Based on the B-body platform, the Roadmaster was also available as a hearse with a small-block V8 and a four-speed auto.
10 photos

Derived from the Corvette, the LT1 engine used to crank out 180 horsepower and 300 pound-feet (407 Nm) of torque when it was new. This particular hearse, which is lovingly called Haulin’ Ash, is a little more special thanks to an LS6 that was stroked to 383 cubic inches (6.3 liters). Procharged to 1,000-plus horsepower and heaven knows how much torque, the one-off Roadmaster also happens to be a proper strip-slaying machine.

In addition to the fury hiding under the bulging hood, the hearse-bodied Roadmaster can achieve this result thanks to coilovers all around, skinny tires up front, and bead-locked wheels wrapped in Mickey Thompson drag radials out back. Although the owner doesn’t mention what kind of transmission he’s running, this build probably relies on a modified 4L60-E tranny.

Introduced in 1992 and produced until 2013, the electrically-commanded evolution of the Turbo-Hydramatic 700R4 is complemented by a Holley Dominator EFI kit that costs a little more than $4k at the time of writing.

The force-fed motor also flexes a Frankenstein Freakshow billet intake manifold inspired by the pro-stock design. This manifold accepts 102-millimeter throttle bodies, which is probably what Jason Pickett is running in his crazy-looking hearse. Haulin’ Ash further rocks carbon-fiber door cards and thinner windows to shed a few pounds off the stock specification.

On that note, can you believe that Jason drove the damn thing about a year and a half with 1,000 horsepower before he decided to modify it for racing? 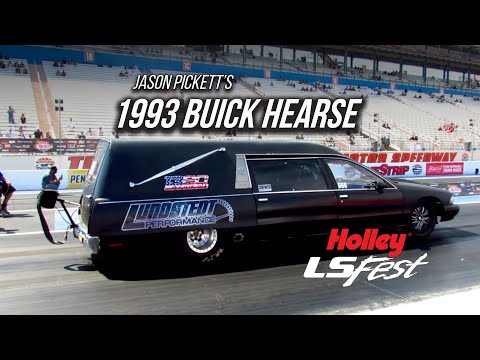