Home > News > Classics
Aurel Niculescu
Before turning into the GMC Sierra and Chevrolet Silverado siblings, there was the General Motors C/K truck series. And it was a glorious one, especially after a few decades have passed and people restored them to perfection.
27 photos

Not to deride the stock Chevrolet/GMC C/K pickups, but these trucks were mostly intended for hard work once they exited the factory premises. Now that decades have passed, they are turning into rolling works of art with help from loving caretakers. And this 1967 is probably a prime example of that.

Normally, one would argue that we are dealing with a restomod. Not even Grand Rapids, Michigan-based Garage Kept Motors calls it that, because it’s not. Instead, we are dealing with the cool niche of “professionally restored and respectfully upgraded” vehicles. And the ‘67 GMC short-bed pickup truck even comes with just 70,864 miles on its odometer, which is around 114,045 km for the Old Continent residents.

It hasn’t traveled a lot, but it still went through a complete restoration process that rendered it black-on-chrome pristine and complete with a subtle red line to contrast everything. Nothing hinders the view now, as every badge has been deleted – save for the GMC letters up front to make sure you’re not confusing this C10 with the Chevrolet counterpart. And has anyone noticed we are dealing with a subtly lowered truck?

Inside, the modifications are just as tasteful – but a tad more obvious. While the black dashboard makes a cool connection with the exterior atmosphere and the steering wheel along with the instrument cluster is as vintage as it may be, some other parts are up to modern standards. Above all, the TMI bucket seats have gray upholstery to provide a slight contrast. But the biggest highlight of the cabin has to be the embroidered door card trim, if you ask us.

Moving to the oily bits, we are dealing with a freshly rebuilt, numbers-matching 283ci V8 engine that proudly shows the Chevrolet family connection. Everything is spotless inside the bay, as well. So, it’s no wonder that we are not dealing with a cheap truck. Instead, the short box regular cab has an asking price of no less than $64,900! 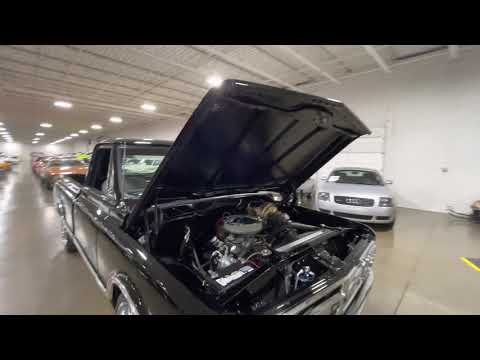