Vintage automotive angels might be the ones humming in the ears of car enthusiasts, frankly. We don’t know. But it’s safe to say that such a pristine OG ‘Stang attracts crowds like a black magnet of crimson force.
33 photos

Naturally, there's also a howling asking price attached to it, as one needs to pony up serious cash to get it off Grand Rapids, Michigan-based Garage Kept Motors' inventory lot. There, a 1966 Ford Mustang Fastback resides proudly with just 23,366 miles (37,604 km) on the odometer. And despite being made some 55 years ago, it still looks as if we are seeing it the very same day it left the assembly facility.

Interestingly, the dealership stays clear from the “original everything” trap. As the description shows, there are some “minor” alterations. Such as using a replacement front grille from a ‘65 Mustang. But all in all, if a classic black pony is the dream car, this could be it. Those chrome trimmings, as well as the Mustang-branded 13-inch steel-style wheels sure look shiny and ready to mesmerize.

On the other hand, the interior is perhaps in a league of its own. As much as this Mustang feels entirely subdued when viewed from outside, the perception changes 180 degrees when entering the cockpit. There, a sea of red basks in everyone’s view. The red and black contrast is one for the ages, that’s for sure. Naturally, that’s not original either – the car was built in Dearborn, Michigan with an Antique Bronze shade and a black-trimmed interior, according to the shared VIN decode details.

Well, this 1966 Mustang sure is shaping up to be a real trickster. As such, although we are greeted by 427 Cobra branding upon opening the hood, we are actually dealing with a replacement 302-cubic-inch Ford V8 engine. I don’t know the strategy behind the ruse, perhaps they just thought it looked way better like this...

Anyway, the surprise package is truly complete with a hard-to-believe asking price. As such, you had better be prepared to howl (at the Moon) when asked by the dealership personnel to pony up no less than $79,900! 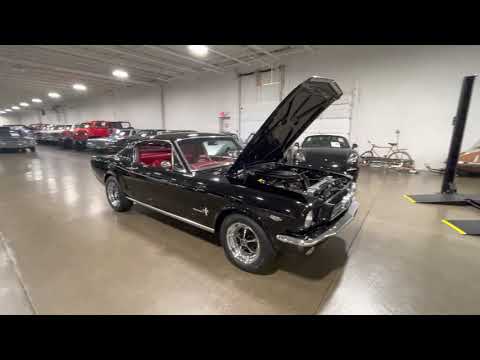