5 Newly Purchased Ferrari Caught Fire Out of the Blue
Coverstory 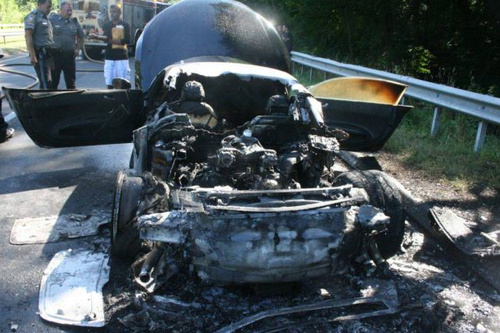 An Audi R8 valued at $140,000 with options, which was destroyed in a fire on Sunday morning in a limited-access parkway from Connecticut, is currently under investigation by fire officials. The car, belonging to a Powerball winner, caught fire out of the blue, local reports read, and firefighters are close to classifying it as accidental.

Apparently, Rahul Patel was driving his one-week old car northbound on the parkway around 9 a.m. when, between exit 46 and 47 in Fairfield, he looked up in the rearview mirror and saw smoke.

Patel pulled over to take a closer look at the problem, but as soon as he stepped out of the car he reportedly saw flames coming out of the engine, which is located at the rear. Fortunately, nobody was hurt in the incident.

Patel may have lost a car like this, but he still is the winner of a $25 million Powerball jackpot. According to CTPost, he won the money on June 29, 2009, from a $1 ticket. He only received a check for $8.7 million after all the taxes. Maybe he still has some of those money saved somewhere so he can just buy another one.

This, however, brings to our memory a similar event that occurred late last year in Romania, when while being tested by two Audi service center engineers, a 2009 R8 model also reportedly caught fire out of the blue.

Is this just the bad luck that chases lottery winners or a glitch in Audi’s R8 model?