2 Unagi's Latest E-Scooter Claims to be the Smartest on Earth, Is Also Light and Powerful

4 Minimalist-Looking E-Moped Has a Magnesium Frame, Claims to be the World's Lightest

5 Most-Awaited E-Scooter in India Finally Goes on Sale, Has a Range of 112 Miles per Charge
Car video reviews:
Up Next

You can describe Scooterson’s two-wheeler in a lot of ways, emphasizing its smart features, rideability, complex mobile app, and more. Or you can simply label the Rolley electric scooter as freaking cool.

Looks and Brains. Rolley Is a Cool-Looking E-Scooter That Needs No Acceleration Throttle

Scooterson is no newbie on the micro-mobility market. In fact, we first heard about the company more than six years ago, when it introduced the Rolley. And even back then, the Scooterson boasted of the smart features of the scooter. We can only assume the Rolley's got even smarter since then, as several versions have been released over the years. In addition to the Rolley, Scooterson also produces the Elf two-wheeler, which it refers to as the world’s smartest kick scooter.

According to the California-based company, the new Rolley was organically redesigned and engineered from scratch. It now comes in two versions, the standard Rolly and the Rolly+. And the first thing that’s going to strike you with both is the cool-looking but also useful, auto-balance design, which makes the vehicle really easy to ride, even by those who find it hard to ride a bicycle or a kick-scooter. Another great thing about this design is that it makes the scooter stand by itself without requiring a kickstand, thanks to its fat tires. It also automatically locks itself when you walk away.

The scooter's chassis is a 3D bent aluminum alloy one with a carbon fiber reinforced polymer body (CFRP) body and also includes aerospace-grade alloy parts. By using these materials, the company managed to reduce the total weight of the two-wheeler by 40 lbs (18 kg), which, of course, also means that this bad boy is by far as light as a feather. In fact, it weighs 68 lbs (31 kg).

You can order the Rolley in multiple colors, including neon ones, and all of them look simply beautiful.

Aside from its irresistible design, the e-scooter proves to be average when it comes to performance, packing a 750w hub motor with 80Nm of maximum torque and being powered by a 750Wh battery with a lifecycle of 500 charges. The battery can be fully recharged in three hours. In terms of range, Rolley offers up to 30 miles (48 km) on a single charge and can reach a top speed of 20 mph (32 kph).

When it comes to smart features, though, this wheeler shines again. Both Rolley and Rolley+ come with a mobile app that is compatible with both iOS and Android, and you can pretty much control everything through it. A built-in phone holder is included with the scooter, to make things more accessible for the rider. There’s even a USB port so you can charge your phone.

Automatic day and night modes are available with both versions, along with intelligent, adaptive lights and a keyless system. If you are within the activation range, you can use the mobile app to unlock the vehicle via touch or face ID.

The Rolley uses motion detection, AI (artificial intelligence), and advanced algorithms to recognize your movements and offers you riding suggestions so that no accelerator is necessary. It adjusts acceleration levels tuning in with your own motion and the route you’re riding on.

An anti-theft feature gives you instant notifications via the app if someone tries to tamper with the scooter, and there are also charging reminders offered. This feature, as well as the smart riding suggestions, are only included with the Rolley+. In addition, this version also offers remote lock and unlock, a “find my scooter” feature with GPS tracking, and a sharing option. The sharing option allows you to lend the Rolley to a friend, colleague, or whoever, via the mobile app, simply by accepting their request to use the scooter. You will receive a notification on your phone, and you grant them access.

Scooterson recently started an Indiegogo campaign for its Rolley electric scooter, and you can pre-order the standard version for $2,290. If you opt for the Rolly+, it will cost you $2,390. The estimated shipping date is May 2022. 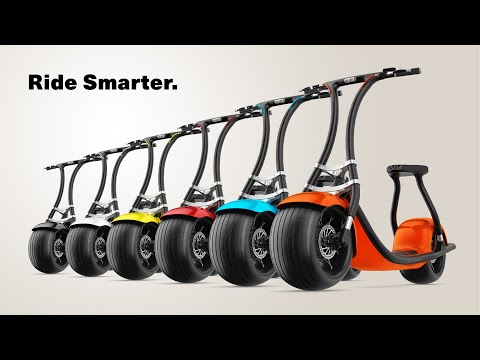