Although it really doesn’t live up to the original’s reputation, the 2000 remake of “Gone in 60 Seconds” does feature its own highlights. Among them, we could easily call out Nic Cage’s tortured interpretation, Angelina Jolie’s blond dreads, and – above all – the ‘67 Dupont Pepper Grey Ford Mustang fastback impersonating “Eleanor.”
38 photos

Even though Jerry Bruckheimer’s movie isn’t memorable for much else (save for the final car jump sequence), lots of automotive fans would love to see the rather unlucky muscle car enjoying a new lease of life in their own garage. Due to its inherent popularity, some even lived to see the dream come true.

Though one should always be on the lookout for possible copyright infringement, an “Eleanor” clone that’s not entirely true to the originals from the blockbuster movies might get a hall pass. One such case is now mesmerizingly presented by the Hand Built Cars channel on YouTube in the video embedded below.

While on previous occasions we have seen old and beat down cars (including a couple of Mustangs) come back to life via incredible feats of solitary will and resourcefulness, on this occasion we’re dealing with a professional restoration and customization process, courtesy of Schwartz Performance, a shop from Woodstock, Illinois.

As such, this time around we’re not just treated to a set of photographs from before, during and after the build. Instead, the company also documented all the minute details and – above all – the modification spreadsheet featuring all the new components. It’s all there in the description and while it’s not as lengthy as the almost 45-minute-long video, it’s still a huge read.

Considering the massive amount of modern parts that went into this build, it’s no wonder the project car looks entirely ready to rip apart whatever tarmac has under the wheels. And it probably could do it, thanks to the Schwartz Performance bolt-in G-machine chassis, Ridetech adjustable coilovers, Baer brakes, the numerous heavy-duty components, and that Ford Performance 5.0 Coyote Aluminator crate engine hiding under the hood alongside a Roush supercharger kit and Boss 302 alternator kit. 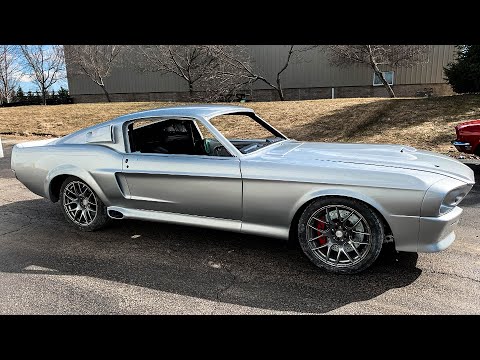