2 Fiberglass Campers Are Making a Comeback, and the Escape 5.0 Crushes Any Doubts As to Why

4 German Machines Dominate Countless Industries, and the Nova Light Campers Are No Exception

5 Zinger Camper Trailers Allow for Off-Grid Living With Effective Capability on a Budget
Car video reviews:
Up Next

If there's one vehicle that people seek to modify into a fully functional mobile home, it's the ambulance. With their innate ability to accommodate endless systems and gear and offer a sizeable habitational area, off-grid and on-road lovers adore this vehicle style. Well, let's take a look at what it takes to blow away any RV manufacturer, as long as you put in the sweat.

I recently ran across a video posted by New Jersey Outdoor Adventures. This YouTube channel is all about the van, camper, and RV lifestyle and is hosted by channel creator Patrick Botticelli. Throughout his travels, Patrick finds amazing custom conversions and sheds light upon them for all the world to see.

This time around, Brooklyn, New York, is the spot, and the machine is nothing more than the ambulance conversion you see in the gallery, a project completed by an amazingly creative human named Josh Sheldon. Much about Josh isn't known, except that he's an engineer and, by the looks of this video, also a musician. Hmm, come to think of it, those backgrounds sound like the perfect mix for something out of this world, and his customized home really is something else.

This story began some time ago when Josh picked up a secondhand ambulance for $18,500 - sounds like you need to start combing those classifieds – to transform it into a mobile pad during the worldwide health crisis. From there, Josh put his smarts to work designing and building this remarkable mobile dwelling.

As the video below begins, a word or two is shared between Josh and Patrick, and suddenly, we're thrusted right into the belly of this beast via a side door. Right away, you can tell that this conversion is a bit different from what we're used to. We first locked eyes with a midi controller, wall-mounted TV, and to the left, the rest of Josh's home.

But, our tour begins from the right side of the vehicle or the cab; steering wheels will be steering wheels, and Josh is soon showcasing his bathroom. With a tad of ingenuity, Josh created a wet bath that doubles as a walk-through and a friggin laundry mat.

It's then on to the extensive electrical system that's in place. From a tablet mounted near the bathroom door, Josh controls nearly any system that is fed with electricity. From pumps to fans to lighting, both inside and out, all can be accessed from there. Control over cameras is available too.

With a mixture of composites, woods like cedar and birch, and metals, the interior of the ambulance not only boasts a beautiful blend of colors and tones and an insane amount of modularity. When I say insane, I really mean it. Everything in this home seems to be able to achieve more than what you see at first.

For example, on the starboard side of the unit, a modular counter is found extending the galley block. Well, this countertop can be used for cooking, resting your elbow, or, if you're expecting guests, it can be lowered and transformed into a seating area with nothing more than a foldable mattress on top. At the very rear, a bedding area can be popped into use in no more than 30 seconds with the addition of a platform that spans the width of the enclosure. Another sleeping space or couch is found near Josh's work desk on the port side.

This is also another space that reveals massive modularity. In this RV's corner, the engineer adds a modular table system, fit with an automatic lifting mechanism in case inspiration hits while standing around or sitting down. Come to think of it, this feature can double as a bar during get-togethers.

The rest of the video, nearly a third, takes us through the extensive journey of electrical and life systems that have been added to this rig. It's primarily technical stuff, but if you're curious to see what a clean setup looks like, dive in and soak it all in.

As for the question on everyone's mind, you'll never guess how much this puppy cost. "In total, including the truck, I spent 70 or 75,000 dollars..." WHAT!? There's nothing more I can say to tie things off any better. G.G. Josh! 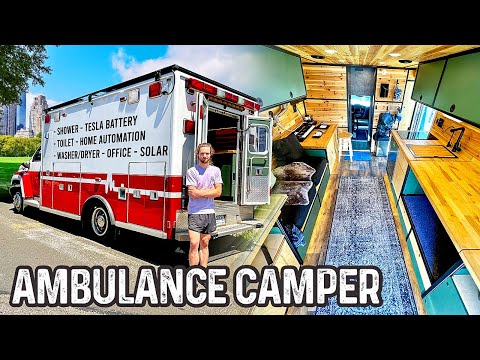