4 Mogul Superyacht Is Designed by an Influencer, Aims to Be Different

5 On Board Beyonce and Jay Z’s $2 Million-a-Week LANA Superyacht
Car video reviews:
Up Next

Summer is here, which means that most celebrities are either already on vacation or packing their bags to go. If you happen to be looking for vacation inspiration that can double as daily motivation, here are LL Cool J, Magic Johnson and Samuel L Jackson to deliver.

For a few years now, these pals get together every summer for an extended cruise on board one of the world’s most impressive superyachts ever built, the Aquila. After a year on hiatus (that would be 2020, thanks to the international health crisis), the boys and their families are together again, having just set sail on the Aquila.

LL Cool J, Magic Johnson and Samuel L Jackson have all been covering their awesome adventure extensively on social media. Because it’s never a good look to brag outright, they’re framing their many videos and posts as “motivational,” including captions about how pursuing your dreams always pays off in the end. To those who already know that, the same content can serve as vacation inspiration because, once these celebrities are done, Aquila is free to charter.

It won’t be cheap, though. In 2019, the asking price was of $950,000 a week, which, as is standard, doesn’t include stuff like food and beverages, or fuel. In 2021, the price is reportedly well over $1 million, but only management firm Burgess is able to offer an exact quote.

For the time being, Aquila is home to LL, Magic and Samuel, as well as Rodney and Holly Robinson Peete, and future guest Steve Harvey. They’re now off the coast of Italy, living it up in locations like Capri, Porto Cervo and Amalfi.

So what exactly makes the Aquila worth this kind of money, you might ask. Well, everything, to put it shortly.

The $150 million superyacht was delivered in 2010 at the Fort Lauderdale International Boat Show, under the name Cakewalk. It was a 5-year project that, to this day, stands as the most impressive American private build since the 1930s. Created on commission for Charles Gallagher, owner of Gallagher Industries, and built by Derecktor Shipyards, it is a 281-foot (85.6-meter) superyacht with a volume of 3,000 GT spread across four decks.

In 2014, Cakewalk was sold to its second owner ever, Ann Walton Kroenke of the Walton family that built Walmart into a retail giant. Almost right away, Cakewalk, now renamed Aquila, was sent for a complete refit at the Pendennis yard in the UK, a massive and complex project that lasted 12 months and employed over 1,000 staff. Aquila went out to sea in 2016 and has, ever since, been available for charter through Burgess when the Walton family is not using it.

To this day, Aquila remains one of the most impressive and unique superyachts in the world, often cited as an example of why you should never judge a book by its cover. While the exterior might not look that much different from its initial days, the interior has been updated to one that is both memorable and incredibly elegant. While this is a privately owned superyacht, the focus of the refit was to make it ideal for charter, allowing all guests to find something that they liked.

With accommodation for 12 guests in six VIP suites, including the owner’s suite on its own deck, and a crew of 28, Aquila features an upgraded sundeck with a jacuzzi, bar and DJ booth with lights and smoke machine so, basically, its own nightclub. It has ample socializing space. The beach club has a pool and a massage room, with an adjacent gym with additional spa and massage rooms. Another spa room is found on the owner’s deck.

Aquila offers hair and nail salon, a massive cinema that sits suspended on sound and vibration-dampening pads (a necessary modification because the room is right above the engine room), a gentleman’s lounge with a thematic London Bar, formal and less formal dining rooms, and a tender packed with water toys and inflatables. The highlight of the refit is the winding marble staircase (which also sits on suspension pads, to avoid damage from the vibrations) and the 36.7-foot (11.2-meter) “waterfall” crystal chandelier done entirely by hand.

Aquila won the 2017 World Superyacht Award and, clearly, the hearts of these celebrities. So, let LL Cool J (and his rather silly duck-face) deliver vacation inspo for the summer of 2021! 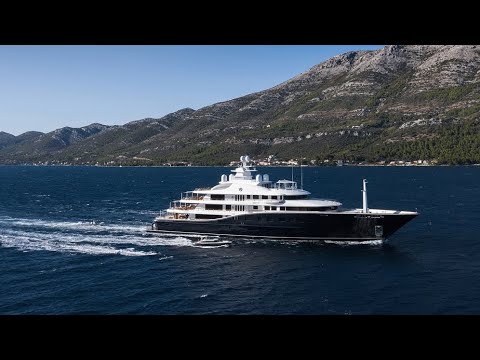