All the hype surrounding the launch of a terrestrial vehicle into space just doesn’t seem to fade away. Of course, knowing that the Tesla Roadster spacecraft keeps breaking record after record helps maintain interest at its peak.
1 photo
Among many things, the Roadster became, soon after its launch aboard the Falcon Heavy, the car with the most miles traveled in the history of mankind (okay, the wheels aren’t spinning, so the odometer registers nothing, but you get the point). So that you know, the electric vehicle already exceeded its 36,000 miles warranty some 630 times by now.

At the time of this writing, the Roadster is 2,274,344 miles away from Earth. By the time you will read this, it will be much farther away, as the car travels some two miles per second. And now you can track every single mile live.

A specially created website, called whereisroadster.com, provides data sourced from NASA’s HORIZONS Web-Interface, combined with a script created by the site’s owner, Ben Pearson, to calculate the distance traveled by the vehicle in space.

The website also provides an interactive map of the solar system and Tesla's position in relation with the planets for a very long time to come, until November 13, 2020. According to the map, at that time the Roadster will be close to Mars’ orbit.

According to Rein, in the next million years, the chances of it hitting Earth are 6 percent. In three million years, chances increase to 11 percent, and so on.

Currently, the Tesla Roadster is also being tracked by the Virtual Telescope Project via a series of real, robotic telescopes, remotely accessible online. 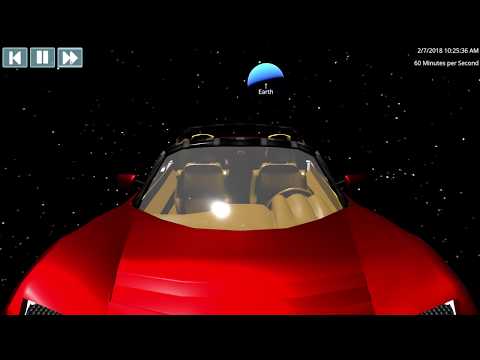