Mircea Panait
The aftermarket certainly loves the C8 Corvette, and Lingenfelter will soon join that club with a tuning program for the Stingray. To be revealed on the second Monday of November, the go-faster package has been previewed on the track with goodies such as the Continental Extreme Contact tires wrapped around Vossen Evo wheels.
9 photos

Although limited in scope by the encrypted engine control unit, performance-oriented upgrades are still featured in the guise of Corsa headers and a Corsa exhaust system. The Performance Design intake system takes the cake thanks to the carbon-fiber plenum, a material that has been employed by the front splitter and rear wing as well.

“We took our C8s out for some pre-production package testing, which they passed with flying colors,” said Lingenfelter Performance Engineering. Pricing details and output figures remain a mystery, though, but don’t expect these babies to come cheap. For reference, Performance Design is asking $1,300 for a carbon-fiber intake while Corsa charges $2,303 for the C7 Corvette-specific Xtreme Pro Series exhaust system.

When all is said and done, it’s obvious that Lingenfelter Performance Engineering has extracted more ponies from the LT2 small-block V8. The free-breathing motor delivers 490 or 495 horsepower with the Z51 Performance Package, and torque isn’t too shabby either at 465 or 470 pound-feet (630 or 637 Nm). There is, however, a “what if” that has to be highlighted. More to the point, let’s talk about rubber.

The Extreme Contact tires are pretty good, there’s no doubt about that, but they’re also cheaper than the Michelins that Chevrolet offers as standard. Both the Pilot Sport All-Season 4 and the Pilot Sport 4S options are specifically developed for the mid-engine sports car, and the French company spent five years developing them while Team Corvette calibrated the chassis for these two compounds and tread patterns.

If you were to pit two C8s with ECs and PS4Ss on the track, chances are the Michelins may have the edge on the Contis in the corners. As for quarter-mile racing, well, you’re better off with skinnies up front and rear drag radials. 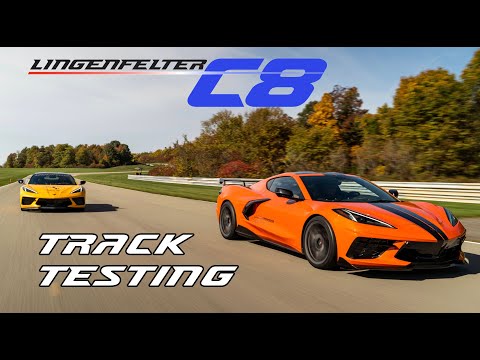