5 Mercedes-Benz C190 Baby-SLS Caught on the Nordschleife
Car video reviews:
Up Next

Europe is enjoying one of the warmest autumns in recent history, which means the yet unreleased Mercedes-Benz roadster has no excuse to hibernate just yet. Not while the Nürburgring is still offering a dry track.
1 photo
Nobody needs a special invitation to go down the famous German circuit, and certainly not the agile SLC roadster. While it’s not exactly a born sports car, the SLK (to be renamed SLC after the upcoming facelift) isn’t afraid of a few high speed turns and bends, and it actually seems to be enjoying itself out there.

It clearly appears to be having more fun than the E-Class (don’t worry, it’s camouflaged up to its teeth) we can see holding it back in one of the turns, screaming out of its tires like it’s about to lose grip at any second. Not the SLC, though, the small convertible zipping from one corner to another with ease.

The SLC too is still wearing the mandatory black camouflage, but we can’t see any surprises being cooked here by Mercedes-Benz.

It doesn’t look like the driver is pushing it too hard, but at the same time the car does appear to be holding it together promisingly, hinting at possibly more than decent handling characteristics. The chassis was never a problem, so it all comes down to how Mercedes-Benz solves the steering equation and the suspension setup.

The SLC is expected to debut early next year, with a possible SLC450 AMG version already spotted, which means it could be joining the rest of the lineup from the start. What exactly is powering that version and whether there will be a more powerful one are still questions that need to be answered, but we haven’t got that much time to wait until we get an official answer.

In the meantime, though, there’s nothing stopping you from enjoying this red Mercedes-Benz SLC doing its thing on the ‘Ring. And if you’re looking for something a bit hotter, here’s what we think is the SLC450 AMG version doing something similar. 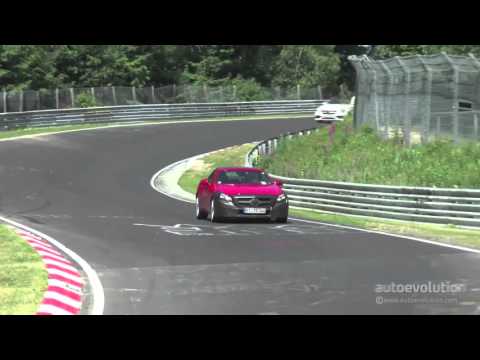