5 Dare to Cruise Above 55 MPH in This Restored “Coca-Cola” 1946 Ford F-1 Flathead
Car video reviews:
Up Next

The Panoz Roadster Was Everything That Ford Mustang Couldn't, Could Be Yours for 50 Grand

Lifted 1979 Chevy Suburban Is an Off-Road Guardian, Will Take You Places Smiling

Chevrolet first started using the Suburban moniker on vehicles built for the 1935 model year. That makes it the oldest nameplate in continuous use across the automotive realm. But that is not the only redeeming quality.
36 photos

A lot of water has passed under the bridge, along with no less than twelve generations for Chevy’s Suburban since then. So, most people would be hard-pressed to come up with this record when asked to say the first thing that comes to mind about the spacious SUV.

Practicality, both RWD and AWD prowess, cool looks, its sibling rivalry with both GMC’s Yukon XL and Caddy’s Escalade ESV might come handier. Legacy and off-road playfulness might also be considered, though, when taking into account this modified 1979 example.

It currently resides in the inventory of Sherman, Texas-based PC Classic Cars as a 4x4 unit that probably takes its car guardian role seriously. Though, it will also take its owner to a lot of adventurous places while fully smiling. Both of them, it seems, judging by the looks of the additional off-road light covers and the highlights presented in the dealer’s description.

Among them, we could note the dual-tone Cordova Brown and Tan paintjob, the off-road side steps with a matching-tone front guard, and the roof rack. There’s also a four-inch (10 cm) Rough Country lift kit and a nice set of chunky 315/75 tires wrapped around 16-inch Pro Comp wheels sheltering power disc brakes. And that’s just the outside.

Moving inside, there’s a factory bench setup that has arguably seen better days, especially around the driver’s area. But that’s of little consequence when opposed to the rest of the details. These include a “cold factory A/C,” power steering, cruise control, a Tan ambiance, as well as just 42,077 miles (67,716 km) on the odometer. And we’re in luck since they are alleged of the original variety.

Last, but not least comes the 400ci V8 engine mated to a Turbo 400 three-speed automatic transmission, as well as the cool asking price of exactly $29,500. 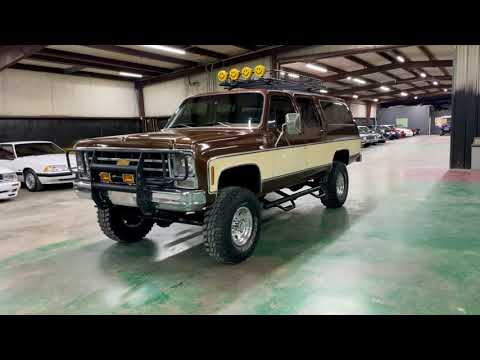