1 Touring With the Kids: Family of Five Sells Off Home to Live on the Road in DIY Van

5 SV Delos, or How You Can Live on a Boat for 13 Years and Make Money Off of It
Car video reviews:
Up Next

For all the talk about downsizing and sustainability, most of the mobile living solutions of today are neither very downsized nor exactly sustainable, and many are definitely not affordable. This raft tent is all these things.

Life in a Tent on a Hand-Built Raft Is the Definition of Downsizing, Floating Off-Grid

How much in terms of personal comfort would you sacrifice in order to travel around? If the answer implies any variation on the idea that you make do with little in terms of comfort, then something like this could probably also work for you. For the rest of us creatures of habit, there’s always the escapism of the videos from My Northern Story.

Behind the My Northern Story channel is Jojo, a Swede who’s build somewhat of a reputation for himself in the off-grid online community. Four years ago, he moved to a tent on an island; in the summer of 2020, he decided to make the tent mobile, so he built a raft on which to place it. He also met Norah and they would take the raft out every summer – they recently broke up, so it looks like Jojo’s third summer of sailing will be different in that he’s doing it on his own.

The idea for the project is to see as much of Switzerland as possible, with minimal impact on the environment. It’s about ditching the civilized world in favor of the solitude and silence of the Dalsland Canal, and socializing only when need be. It’s about cleaning the garbage off the shore and the now-cliche re-connection with nature.

The idea is extreme but, as the channel’s popularity shows, it’s not without its appeal – and plenty of followers. Jojo is living off his savings, after a career in the entertainment industry, and from whatever he makes from online monetization and sponsors. He also takes up contractor jobs, while Norah would work only part of the year to raise money for the summer trip.

So what exactly makes this project so extreme yet appealing? It’s its very rudimentary, basic character: Jojo built the raft in a couple of days, using 28 barrels of 200-liter (53-gallon) capacity for buoyancy and a simple wooden frame. The raft measures 2.9 meters by 7 meters long (9.5 x 23 feet), but the tent is slightly larger, at 5 meters (16.5 feet) in diameter.

Power comes from a 6 hp 2-stroke engine bought on the secondhand market, which is very underpowered for the weight of the raft. The result is that the whole things moves at a crawl pace of just 4 kph (2.5 mph), but then again, Jojo is in no particular hurry.

Inside the tent, which is a Sibley 500 Protech donated by sponsor Canvas Camp, are all the living amenities: a bed for sleeping that is also a couch, a small table slash kitchen area, storage, and a wood-burning stove that heats up the place and can be used for cooking. Speaking of cooking, not much of it is happening on the daily, since the couple are vegan and they strive to eat mostly fresh veggies when possible. The space isn’t exactly cramped, unless you consider the fact that it serves as permanent residence for several consecutive months. In which case, it might feel claustrophobic.

There is no bathroom to speak of: there’s a dry compost toilet outside for emergencies and a shovel for trips to the woods, and the lake water offers plenty of shower, cooking and washing water – sometimes, even drinking water, too. There is no running water, no fridge, and no fancy appliances. When Jojo feels like indulging in a hot shower with soap, he will just heat up a pot and then travel in-land to wash.

For electricity, Jojo relies on two solar panels of 150 watts each and three batteries. The wood for the stove is stored either under one of the panels or in the canoe he tugs with the raft. He also packs enough gasoline and oil for the engine to keep the rig going until the next planned stop. Jojo wants to replace the underpowered but reliable gasoline outboard with an electric one, but this won’t happen until next year.

Again, this is downsizing at its most extreme: the simple life not as Paris Hilton and Nicole Richie understood it in the early days of reality TV, but in the most literal sense. But it works for Jojo and it’s appealing to many others, if only to satisfy their curiosity. 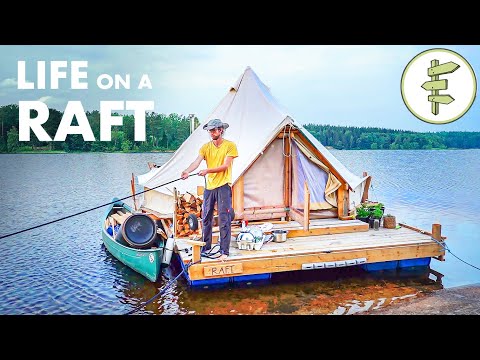 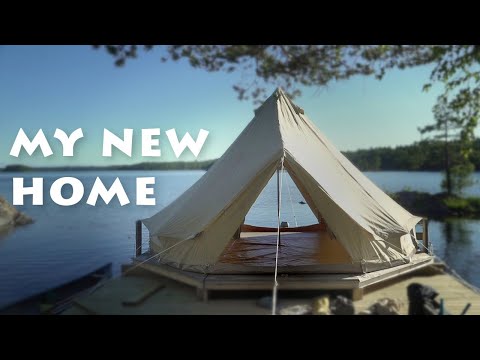