1 Fish-Inspired, Hitchhiking Drone Switches Between Water and Air in Less Than One Second

2 U.S.-Made Hera Wants to Be a Flying Swiss Army Knife, the World's Only Backpacked Drone

4 Wingtra Gives Away Three of Its Swiss-Made Mapping Drones, They Cost Around $20K a Piece

LiDAR-Packed Elios 3 Mapping Drone Knows How to Take a Hit, Gets Back Up After a Collision

Flyability is in the business of making drones for indoor inspection, especially for confined, hard-to-reach spaces. It is not the easiest job to do, but its recently launched Elios 3 model promises to bring mappings and inspection to the next level.
6 photos

Elios 3 is the latest model dropped by Flyability and it boasts of offering an unmatched combination of desired features: stability, intelligence, and versatility. With that signature design also seen in the manufacturer’s previous models, Elios 3 is protected by a collision-resilient cage. Flyability claims that the cage and the reversing motors of the Elios 3 make its mapping drone the only one in the market to be able to recover from flipping upside-down from a collision, without crashing.

In addition to being rugged, this advanced flying gadget is also IP44 rated, meaning it is protected by solid particles over 1 mm (0.03”) in size and from sprays of water, making it a great option for harsh environments.

Elios 3 relies on FlyAware, which is a combination of computer vision, LiDAR technology, and a powerful NVIDIA graphic engine. You can think of the drone as your indoor GPS that uses its LiDAR to constantly scan surroundings and create centimeter-accurate 3D maps in real-time. That LiDAR sensor and the SLAM (simultaneous localization and mapping)-based algorithm also keep the inspecting drone stable when flying, even when it has to deal with tough conditions. It is also easy to control even by inexperienced users, without any special training.

The drone is equipped with a 4K camera and a thermal camera and boasts a 180-degree field of view. It also features a distance sensor and LEDs that produce up to 16,000 lumens.

With no payload, Elios 3 offers a flight time of 12.5 minutes. With the LiDAR payload, the drone can stay in the air for 9 minutes and up to 8 minutes with maximum load.

Flyability doesn’t mention the price of its new Elios 3 but it does encourage customers to contact its sales team for more inquiries. 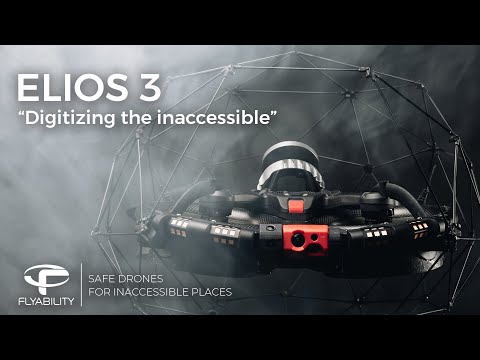