4 What Is the Toyota Guardian Envelope Protection System

As a country, America does consumer luxury very well. We're not talking about gold-plated, diamond-encrusted supercars, but high-end everyday goods, like the Lexus RX. Yes, the brand may technically be Japanese, but the crossover is more of a slice of apple pie than anything else.
1 photo
But like most high-end cars, the Lexus RX becomes economically unfeasible to repair once involved in a serious accident. Most get auctioned off and stripped of parts, but this one ended up in Russia, where our favorite mechanic set to work.

The wreckage looks pretty serious, concentrated around the front. And while Arthur's video makes it look like a quick job, in reality, it took him the best part of eight days to put the Lexus right.

We like that he's showing the dismantling process more than in order videos. A Lexus might appear daunting at first, but you don't need a lot of tools, just time to pick out all the screws. Even the engine has to be removed, and that can't be fun to do.

With the front stripped, we can see that the damage is pretty bad. Even though he has spare parts for that, the mechanic first straightens the chassis rail, after which comes the cutting. The welds get covered up in protective gunk and paint is applied. Other noteworthy parts include the piece that holds the radiator and an aluminum brace.

The last thing to do for Arthur is to hammer out some minor damage in the donor fenders. After paint, everything comes out looking clean and the panels line up nicely. But a small cap for the headlight washers is missing. Don't you just hate it when those get lost?

Do you know somebody who crashed his Lexus RX and had it fixed? How much did it cost to put right? Let us know. 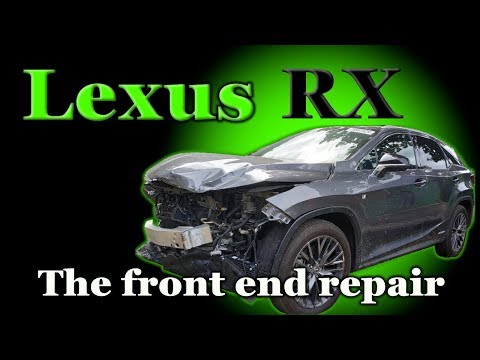