Offered for a very brief period of time, the LFA is one of the best-sounding cars entitled to wear a license plate. Gifted with an even-firing V10 and a six-speed automated manual, this engineering marvel sounds like a high-octane angel singing the song of its people thanks to Yamaha. Both the engine guys and the peeps who produce pianos, that is.
6 photos

The final example of the breed rolled off the assembly line in December 2012 with the so-called Nurburgring Package, an option that bumps output by 10 ponies and makes the transmission shift 0.05 seconds quicker. The car in the featured clip isn’t one of those circuit-oriented machines, but the standard specification that makes 553 sonorous horsepower at 8,700 rpm.

Capable of 9,000 revolutions per minute on full song, the LFA further boasts 354 pound-feet (480 Nm) at 6,800 rpm, with 90 percent of that torque delivered from 3,700 rpm. Originally an all-aluminum affair, the front-engined supercar eventually switched to a carbon-fiber construction to improve the power-to-weight ratio. Be that as it may, those were the early days of carbon-fiber shenanigans, which is why the LFA is quite weighty.

Capable of hitting 60 miles per hour (97 kilometers per hour) in 3.6 seconds, this amazing piece of automotive history tips the scales at 3,559 pounds (1,614 kilograms). By comparison, the Lamborghini on the other side of the track is 3,351 pounds (1,520 kilograms) with all the fluids accounted for.

The slightly larger engine of the Huracan STO cranks out 631 ponies and 417 pound-feet (565 Nm) of torque, and even though it doesn’t rev as high as the 1LR-GUE in the Lexus, there’s no denying it makes a sweet sound.

As you might have already guessed from simply mentioning LFA vs. Huracan STO in the headline, there’s no way the Lexus could win against the Lamborghini over the quarter mile. But it did exactly that in the first race due to a poor launch from the driver of the mid-engined Italian rival.

The second race concludes with a tremendously dominant victory for the Super Trofeo Omologata, which rocks a quicker dual-clutch automatic transmission and more aggressive tires to boot. As for the roll race, bus lengths is the only way to describe the result of this V10 showdown.

Are you surprised? Not in the least, but Thomas Holland and James Engelsman of Throttle House wouldn’t take the Huracan STO home. “That car is something special, it really is. Like, to a degree that no other car I’ve ever driven makes me feel like that one does,” said Thomas. “How do I make an MX-5 make this sound,” added James on a more humorous note. 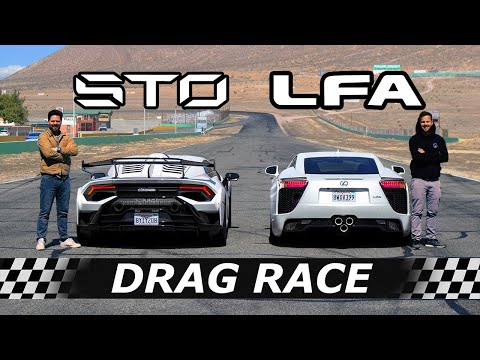