1 What Happens When Radwood Meets the Concours D'Lemons?

The most significant Ford of all time is now a nonagenarian, so it’s time to take a look back at how one car changed the world forever.

Let's Celebrate the 90th Anniversary of the 1932 Ford

Henry Ford would’ve been happy selling the Model T, in black only, for the rest of his life. Its successor, the Model A arrived in 1927, with the choice of four colors...This allowed competition from Chevrolet, Dodge, and others to finally put a dent into Henry’s dominance. It took the brilliance of his son Edsel to devise a new lineup based on a common chassis.

What emerged were two chassis. The model B was the true successor to the Model A, and it was all new for ‘32. Its big brother was the Model 18, almost identical except for power, as it introduced the world to the timeless Ford Flathead V8 while Model B examples retained the old inline four.

In addition to commercial models, you could order either engine in a 2-door coupe (Tudor), 2-door convertible, 2-door roadster, 2-door sedan, 4-door sedan (Fordoor), 4-door phaeton, sedan delivery, sport coupe (fixed leather top), 3-window coupe, and a pickup truck. The Victoria model was the most luxurious, designed mostly by Edsel alone. If you had $495, you could imagine the Ford of your dreams and it would arrive a few weeks later.

Given the thousands of possible combinations, the old man made sure to control costs wherever possible. This was done by mandating that all models use black fenders, wire wheels, and almost all of them used the same spindles, axles, and other moving parts. If you wanted to spend a little more, you could get dual taillights (right side was an option), turn signals, luggage rack, mirrors, and a clock.

Years in the making, this one year only lineup was the result of several million dollars of investment along with the personal heartache of Edsel’s public shaming by his crazy father. Henry’s harsh treatment of his son during this era undoubtedly led to Edsel’s untimely death from stress induced stomach cancer less than a decade later.

Being the first V8 to be mass-produced, the '32 Ford found fame in all walks of life. Bonnie and Clyde used it to outrun the cops after each bank robbery, prompting them to write Henry Ford praising the car’s solid steel structure and V8 torque. The 4-cylinder Model B was dead after a few months because of the V8’s popularity, which helped Ford to sell 275,000 cars for the ‘32 model year.

In the deepest depths of the Great Depression, Ford offered a lineup that was cheaper than Chevrolet, Buick, Oldsmobile, and just about everyone else. Thanks to thick layers of vanadium steel, most of them were still on the road when the boys came back from WWII. It was then they discovered the true potential of the Flathead.

Hot Rodders like Vic Edelbrock, Fred Offenhauser, and Alex Xydias transformed '32 Fords into world-class dragsters, open-wheel racers, and even overland rally machines. Perhaps the most prolific of these were two Russian brothers. Zora and Yura Arkus-Duntov were Jews who barely escaped Stalin to settle in Berlin, then barely escaped Hitler to land in NYC. It was there that they developed the ARDUN cylinder heads. This kit transformed the cam-in-block Flathead to an overhead cam design with Hemispherical heads.

In an afternoon, your '32 Ford could be making over 300 horsepower while screaming past 6,000 rpm. Zora went on to write Chevrolet to ask why the 1953 Corvette was a six-cylinder automatic, and he became Corvette’s Chief Engineer until 1976. This year at The Amelia, RM Sotheby’s saw fit to list original survivors at just under $500,000. Don’t let that scare you, as dozens of companies offer new bodies in steel, fiberglass, carbon fiber, or whatever you can dream. The '32 Ford is a blank canvas awaiting your touch, so stay with us for more great history lessons! 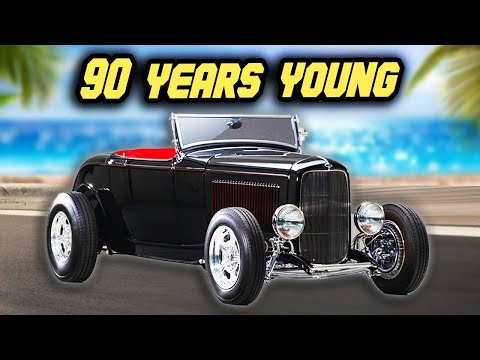