2 Average-Looking Toy Car Is in Fact a Science Lab on Wheels, Packs a Working Speedometer

3 Give Your Kid a Break From the Digital With These Unique, Handmade Toy Cars With Attitude

LEGO-Compatible Toy Car Is an AI Robot Packed With Sensors, Can Follow the Track by Itself

While it may look like a simple toy car, the M1 STEM is in fact an AI (artificial intelligence) robot that takes playtime seriously. It is modular, compatible with LEGO blocks, packed with sensors, and has a plethora of applications.
8 photos

The M1 STEM Car was developed by STEMHUB and doesn’t just deliver endless hours of fun but it also acts as one gifted teacher, introducing your kid to the basics of programming. Children can also develop other skills by playing with the M1, such as their problem-solving skills, creative thinking, logical deduction, and so much more.

This STEM (Science, Technology, Engineering, and Mathematics) tool comes as a kit with all the necessary parts included so that your kid can assemble the car. The M1 can optionally be equipped with micro:bit, a pocket-sized computer that allows you to program the toy vehicle and make it do various things.

It also features an infrared track sensor that helps it follow the track by itself. The M1 STEM also comes with ultrasonic obstacle avoidance sensors and features 360-degree movement, being able to go in any direction without changing the orientation of the car.

You can control the toy car either through a wireless controller or the dedicated mobile app, which unlocks many other features such as making the car play music, creating cool lighting effects via its LED headlights, and more. The AI camera of the M1 can follow traffic guidelines by recognizing signs and traffic lights, giving the car autonomous capabilities. That means that you can create your own smart city and have the M1 drive through it on its own, complying with all the traffic regulations.

Right now, the “world’s most powerful robotic car” is the subject of a Kickstarter campaign and you can have a basic kit without the micro:bit for $83. There are a variety of other packages available for purchase as well. The estimated delivery date for the M1 STEM Car is this July. 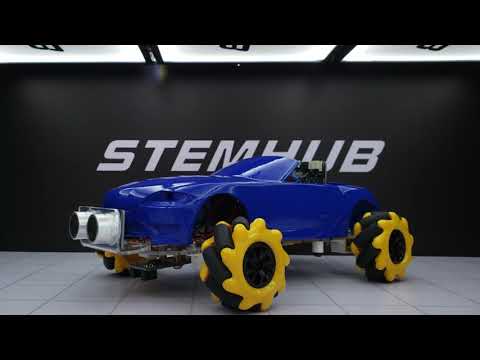