2 How the McLaren Senna LEGO Speed Champions Was Made

Lego Bugatti Chiron Gets Reviewed Like a Real Car

Home > News > Car Profile
Mihnea Radu
In 2018, Bugatti joins a pretty long list of car companies who collaborate with Lego. But we think the Chiron made from bricks is way better than everything else because it has lots of moving parts and is made using the versatile Technic system.
2 photos

This isn't the first collaboration between Lego and Bugatti. They made an excellent but expensive 1:8 scale kit based on the Chiron, which we still think is the bee's knees. But in August last year, they dropped this bomb.

It was later shipped to the Paris Motor Show and even made it to the 2019 Canadian International Auto Show, where the guys from The Straight Pipes YouTube channel got to check it out. The review is geeky and funny, just like anything about Legos should.

Not only does it look like the real $3,000,000 hypercar, it even works kind of like one. That iconic pop-up rear wing does its thing and even keeps the air brake function. Speaking of stopping power, the brake rotors behind the original Bugatti wheels fabricated from Lego, so they can't stop the car. But go-kart brakes are hidden at the back, and they do the job of slowing the vehicle. Power comes from an electric motor with 5.3 horsepower and 68 lb-ft (92 Nm) of torque, which allows it to hit 20 km/h (12 mph).

The numbers required to make this are pretty insane: over a million Lego Technic pieces in 300 categories, 13,000 work hours, 2,304 Lego Power Function motors and 4,032 gears. It's a bit of a process, but the doors which are also made from Lego do work, allowing access to a cramped but detailed interior. For some reason, even the fake exhaust tips are accurate on this thing.

“This life-size model is a first of its kind in so many ways, and with it, we wanted to push the boundaries of our own imagination,” Lena Dixen, senior vice president of product and marketing for LEGO, says in a statement. 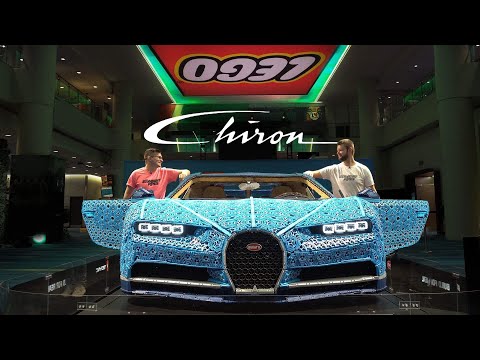