2 A Mustang, a Camaro, and a Challenger Walk Into a Bar – Which One Would You Take Home?

A few years ago, if someone would've told you that they drive a Toyota Supra with an automatic gearbox, you would've most likely disapproved the idea. But today, you'd first have to ask what kind of an automatic gearbox it is that they're using because the Supra's conventional 4-speed is no match for a modern dual-clutch DCT.
26 photos

DCT swaps are a big thing nowadays, and I've seen both Supras and RX-7s turning to this solution. Is a DCT-swap going to take away from the pleasure of driving your sports car? Perhaps it will. But is it going to make it faster? Well, that's a certainty. Like it or not, you'll never be as efficient in changing gears as a modern, dual-clutch gearbox. And if you're looking to improve your lap times or quarter-mile (402 meters) times, DCTs are a great alternative.

With that in mind, the Supra that showed up for this drag race makes use of that kind of gearbox. With a fully-built, single-turbo 2JZ-GTE engine under the hood, the driver has now got access to about 700 horsepower. Looking at all the upgrades on this car, it feels shocking that it's running on replica Rota wheels. Anyway, with RWD and weighing in at 3,703 lbs (1,680 kg), it's going to have a tough time going up against the two GT-Rs.

This isn't the first time that we get to see this white R34 GT-R. It's the same car that humiliated a blue, 900-horsepower Supra not long ago. This also has a big-single turbo, conversion and the engine has been stroked up to 2.8-liters. With 800-horsepower on tap and AWD and weighing in at 3,439 lbs (1,560 kg), it does have the disadvantage of using a manual gearbox.

The third challenger is a bone-stock Nismo R35 GT-R. With 600-horsepower on tap, some people might expect it to be less suited for the challenge. But with all the modern technology it incorporates, it may be more efficient in using that power and causing headaches to its opponents. For the first test of the day, we'll get to see how fast these cars can accelerate to 60 mph (96 kph) from a standstill.

The R34 GT-R finishes the test in just 2.97 seconds, which is nothing short of amazing for a car that's almost two decades old. The Supra is off to a rather slow start, and it seems to be having some traction issues as well. But it still clocks in at 3.88 seconds for this first challenge. But it's the R35 that comes out on top with a solid time of 2.78 seconds! I guess paying over $200,000 for one of these has some benefits after all.

For the next challenge, we get to see all three cars performing individual quarter-mile runs. This can be a good hint for the outcome of this challenge. The R34 GT-R is up first and manages to cross the finish line in 11.13 seconds. The Supra is not that far behind, at 11.72 seconds. But their efforts fall behind once more, as the R35 GT-R finishes its run in just 10.84 seconds.

Finally, all three cars line up for the main challenge. For some reason, both GT-Rs are off to a slow start, so a rerun is in order. This time around, the Supra gets left behind, while the R34 takes the lead. The Nismo starts catching up, but its older sibling still wins the race by a small margin. With two more rolling-race starts coming up next, the Supra finally redeems itself by finishing first. But it's still the R34 GT-R that wins the overall challenge. 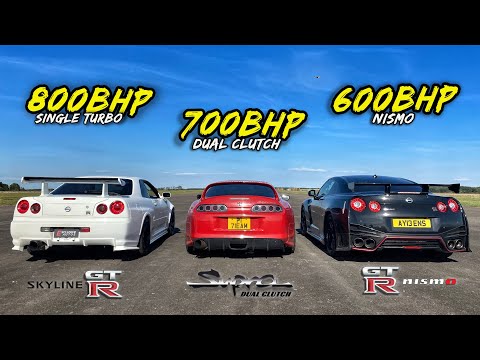