Built by a relatively new Chinese company, this small and affordable underwater scooter has drawn a lot of skepticism due to the manufacturer’s bold claims about its capabilities. However, as independent reviews have shown, it’s as good – if not better – than advertised.

Last month, I visited the beautiful Greek island of Lefkada and one of the first things I did was go snorkeling. I was pleasantly surprised by the variety of creatures and the underwater landscapes I discovered, so I decided to take it to the next level and go diving.

While the first session went smoothly, the second was cut short by my completely out-of-shape body. I wanted to spend more time exploring, but my legs refused to comply, so as I got back to the shore, I started wondering if there was a capable, affordable underwater scooter I could buy.

Mind you, I’m in no way, shape, or form a seasoned diver so, apart from the scooters marketed by ScubaJet (arguably the most famous brand out there), I knew close to nothing about competing products.

My online research led me to the LEFEET S1 Pro and loads of positive reviews. Now, if you know more about diving gear than I do, yet you never heard of LEFEET, that’s because the brand, in its current form, has only been around for about five years. Based in Shenzhen, China, it started with a Kickstarter campaign to mass-produce the original S1, which at the time was dubbed the most powerful compact scooter in the world. The campaign was a success and so was the S1, which led to an evolved model named S1 Pro.

Measuring 11.8 inches (300 mm) in length, 4 inches (102 mm) in width (without the handles) and weighing just under 6.6 pounds (3 kg) with the battery pack and stock accessories attached, the S1 Pro is the most compact underwater scooter that money can buy.

According to the Chinese company, its frame is manufactured using aviation-grade aluminum alloy for minimal weight and corrosion protection, while its propeller is all carbon fiber for improved durability.

At the core of it all is a small electric motor that can produce up to 18 pounds (8 kg) of thrust or, in simpler terms, it pulls an average-sized, fully equipped diver surprisingly fast. The motor is fed by a 4400 mAh battery pack that offers up to 70 minutes of continuous thrust, depending on the selected power level. There are three of them (low, mid, and high), and, according to those who tested the scooter, it pulls quite well in low mode if there are no underwater currents, meaning that you can enjoy the device and conserve energy at the same time.

As standard, the S1 Pro comes with a handlebar-like attachment that features a wireless controller for the motor. The latter is equipped with ergonomic buttons and can be fitted either on the left or the right side of the unit. In addition, the attachment comes with a GoPro mount that transforms it into a mobile camera.

Another awesome characteristic of the S1 Pro is its modular design. There are tons of accessories that allow it to be maneuvered with one hand or attached to a scuba tank, as well as work in tandem with another unit for a dual motor setup that’s synchronized to a single controller. You can even get a multi-purpose mount that lets you attach an S1 Pro to your paddle board.

It runs both in shallow waters and at depths of up to 131.2 feet (40 m), so it can be used for anything from snorkeling to serious deep sea excursions.

On LEFEET’s official website, the S1 Pro is priced at $799, which is sensibly cheaper than a similar product built by mainstream manufacturers.

Before my third diving trip in Greece, I asked the guys who organized everything and rented the gear if they heard about the S1 Pro and while some of them did, they were skeptical about it, to say the least. The experienced divers argued that “it’s designed and built by a Chinese company. Even worse, it’s pretty cheap and available on Aliexpress, so it can’t be any good.”

Later that day, I got back to my laptop and watched some credible reviews. Much to my surprise, everyone seemed to praise the scooter for being powerful, very well-built, and extremely compact. One of the best reviews I found comes from underwater cinematographer and filmmaker, Matthias Lebo, who spent some quality time testing the S1 Pro. You can watch the video below if you want to obliterate any form of skepticism about this awesome product.

In conclusion, if you’re an experienced diver looking for a capable, yet compact underwater scooter or you’re just an out-of-shape amateur like myself and want to enjoy the depths without worrying about muscle cramps, the LEFEET S1 Pro is definitely worth the money. 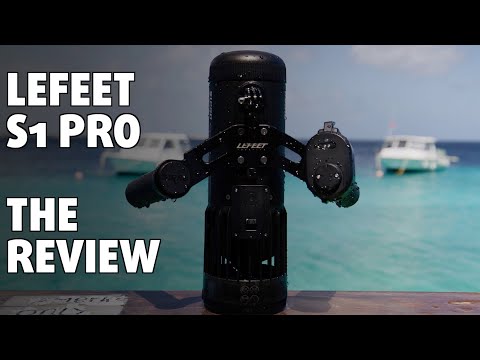