5 F-35B Fighter Jet That Fell Off Carrier Ramp, Finally Retrieved From the Bottom of the Sea
Car video reviews:
Coverstory

On January 24, one of the most modern families of military airplanes currently in use lost one of its own. An F-35 Lightning II crashed into the deck of its aircraft carrier, then into the South China Sea, as it was coming in to land.
6 photos

The incident is still ongoing, sort of speak, with the U.S. Navy still engaged in an operation to recover the plane. Until this week, how the crash unfolded was something of a secret, with the Navy just reporting the incident, and not providing any images.

Somehow, a video of the moment made its way online on Monday. It was supposedly shot with the Pilot’s Landing Aid Television (PLAT) camera on board the USS Carl Vinson aircraft carrier and shows the exact moment the aircraft slams into the deck.

There are two angles we are treated with. From the first one, we see the F-35C, the Navy’s variant of the fifth-generation aircraft, come in to land, hitting the ramp of the carrier with its rear. The impact throws it into a spin to the left, debris flying all around.

The second angle gives us a glimpse of just how violent the impact was, with a ball of fire starting to roll from the left of the screen as the aircraft scraped the landing zone of the Vinson. It spins on the deck, engulfed in flames, for its entire length, and then disappears overboard into the water.

The incident caused injuries to seven people, including the pilot, who managed to eject before the worst of the incident.

It’s unclear at this time how this sensitive video made its way online. According to the U.S. Naval Institute (USNI), the Navy is looking into how that happened.

“What I know is that the Navy is not only investigating, of course, the cause of the mishap itself, but they are investigating the release of this deck video… and I wouldn’t get ahead of their investigation, but I know they’re looking into what appears to be an unauthorized leak of official video,” said according to the source Pentagon Press Secretary John Kirby. 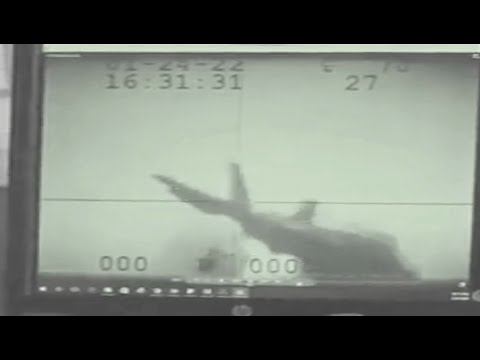