1 Tesla Model S Gets the Aftermarket Touch From Voltes Design

Stormtroopers are clones, right? The aliens with the long necks say they've made them perfectly, even though none of them can hit the side of a barn door. But there's got to be one that gets the bad genes, the one that likes KFC and pie.
12 photos

He probably looks like the Infiniti QX80 by Larte Design. It's a body kit we've seen before, in one configuration or another, but never in this color.

The QX80 is what happens when you take the United Nations convoy vehicle and try to make a luxurious, handsome version for customers in the Middle East.

But this 4x4 doesn't belong to any prince, but to NFL player Domata Peko. Because he wasn't satisfied with the look of his brand new Infiniti flagship SUV, he did what any footballer would do, ordering the most in-your-face body kit out there.

The focal point of the front end is that brand new grille design. We won't pretend to understand what the bumper is supposed to stand out, but the round projectors at the bottom draw attention to the fact that this has a spoiler.

The sides have been not-so-subtly enhanced by adding simple fender flares, side skirts, trimming all the vents and so on. We don't have pictures of the interior, but the trunk does have that awesome wood decking, which is probably the best feature of the car. They make wood floors for the passenger area too.

The rear bumper has been restyled too, leaving room for four 100mm exhaust pipes. Speaking of which, we'll just mention that the 5.6-liter V8 engine has been left stock, so 400 horsepower and 413 pound-feet (560 Newton-meters) will have to move 6078 lbs. And that's before any big football players get in.

For the record, I think the Nissan Patrol NISMO looks a lot better than this. But you can't get that everywhere. 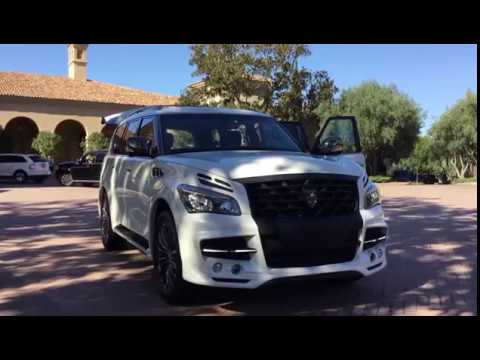