4 Iddes Yachts Introduces Sail 55, a Gorgeous and Fully-Electric Superyacht for All Seasons

At 328 ft (100 m) long and with a capacity of 1,300 passengers, Yangtze River-Three Gorges 1 is touted as the largest electric cruise ship in the world. The vessel recently embarked on its maiden voyage.
7 photos

Built by China Tree Gorges Corporation (CTG) and Hubei Three Gorges Tourism Group, the ship is 53 ft (16 m) wide and 13 ft (4 m) deep. It is fully electric and packs a battery with a capacity of 7,500 kWh, which is the equivalent of the battery capacity of over 100 electric cars. According to its makers, it is the first zero-emissions ship, being charged using clean hydropower. The power is generated by the Three Gorges Dam.

Its builder also boasts of the vessel using the world’s first “high voltage plus low voltage” charging solution and of featuring the most intelligent technologies, newly developed for electric ships.

But there is room for improvement with the Yangtze River-Three Gorges 1 when it comes to its quite limited range. The vessel is capable of traveling just 62 miles (100 km) on a charge, which doesn’t compare to what conventional cruise ships can offer. But on a more positive note, 62 miles is the equivalent of 530 metric tons of fuel, which translates into an emissions reduction of 1,660 tons per year.

Aiming to encourage the switch to greener transportation and the use of cleaner energy, the Chinese Ministry of Transport and the Ministry of Industry and Information Technology sponsored the vessel, which required an investment of $23.5 million, according to China Daily.

Earlier this week, the cruise ship made its maiden trip at the Xingang Dock of Zigui, Yichang City, Hubei Province. As for the vessel’s applications, the Yangtze River-Three Gorges 1 will be used for sightseeing trips on the Yangtze River.

Prior to its maiden voyage, the electric vessel underwent multiple trials, sailing out daily for the past month. 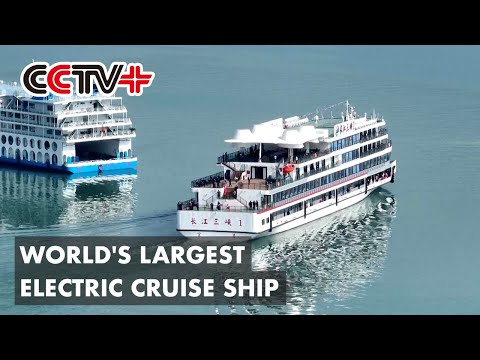