5 Here’s Why The Land Rover Defender Won the 2021 Design Of The Year Award
Car video reviews:
Up Next

While many manufacturers are concentrating their efforts on endurance racing, Land Rover has set its sights on a different type of trial, one that involves paragliding. No, we won’t see SUVs fly (yet) but some competitors at this year’s Red Bull X-Alps will be able to use a fleet of modified Defenders for transport and shelter.
29 photos

One of the toughest adventure races one can take part in is the famed Red Bull X-Alps. For up to twelve days, athletes will have to cover more than 747 miles (1,200 km) of unforgiving terrain through one of the most difficult mountain ranges in the world.

All 32 contestants will combine hiking, ultra-running, mountain climbing, and paragliding in the ultimate test of both physical and mental endurance. On a typical day in this grueling contest, they are expected to hike over 31 miles (50 km), encountering vertical ascents of up to 1,6404 feet (5,000 meters), all while burning up to 6,000 calories.

For this year’s edition, Land Rover is supplying several of the competing athletes, medical crews, and support staff with adventure-prepped versions of their capable Defenders.

Aimed at providing transport for vital supplies and equipment, as well as shelter from the unpredictable weather conditions of the Alps and a safe place to rest in, the five-door 110s will be fitted with Autohome roof tents, a portable shower system, exterior side-mounted gear carriers, and integrated air compressors. Additionally, each Defender’s built-in 4G Wi-Fi connectivity will allow teams to keep in touch with each other, as well as with the families back home.

With a maximum payload of up to 1,984 lbs (900 kg), dynamic roof load of 370 lbs (168 kg), the British manufacturer believes that each vehicle will be more than up to the task without featuring any mechanical modifications which is pretty bold considering that the new models aren't as reliable through rough terrain as their legendary predecessors. That’s because, unlike the athletes, they won’t have to climb up the same perilous routes and will be stationed across several checkpoints.

Still, their capabilities will be tested considering that the support vehicles will be spend most of their time off-road and will be jam-packed with gear and supplies. For that, the Terrain Response 2 technology will undoubtedly come in handy as it allows drivers to choose one of several modes that optimize performance to better suit the trails they’ll have to navigate through.

Seven of the competitors will be supported by Land Rover, including six-time Red Bull X-Alps winner Christian Maurer. Joining the Swiss are veterans Paul Guschlbauer from Austria, Markus Anders from Germany, Tobias Grossrubatscher from Italy, and American Gavin McClurg, who is also known for his sailing endeavors, circumnavigating the Earth twice. French athletes Laurie Genovese and Théo de Blic, both newcomers in the competition will also be supported by the British automaker.

The tenth edition of the Red Bull X-Alps is scheduled to start on 20th June 2021 from the Mozartplatz in the center of the Austrian city of Salzburg. A total of 33 participants have been confirmed for the event which will feature new routes and end in the beautiful town of Zell am See. 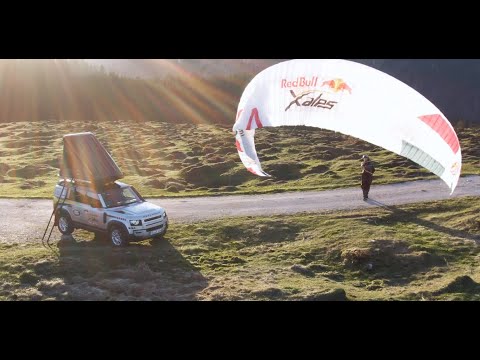