1 Thief Brags on Facebook Live About "His New Wheels," Gets Caught by Police

3 Watch a Traveler Escape an Attempted Armed Robbery in Argentina

Not the most sophisticated robbers, but in the end effective. On January 29, several masked men (at least six, as the video appears to show) used a Land Rover Defender, which apparently was also stolen, to smash through the doors of an Aldi supermarket in Chatteris, U.K.
4 photos

The CCTV footage released by police and made public by Cambridge News shows how the Defender is violently smashed, in reverse, right through the store's front doors. Although metal and glass fly all over the place and the path is apparently clear, the driver pulls away and backs into the shop again at high speed.

The goal of the group of raiders was to take off with the ATM seen right by the front doors. Their plan is somewhat in danger after the vehicle gets stuck in the mess it made trying to clear a path. Three of the robbers are forced to adapt to the situation and start pushing the Defender back out so that they could tie the ATM to it.

The car used for the robbery had been previously prepared for the task. As seen in the footage, the yellow rope used to tie the ATM was already in position and, hadn't it been for the Defender getting stuck, the robbers' escape might have been probably faster.

They eventually managed to pull away, with the ATM tied to the Land Rover. Police say they eventually escaped in a Volkswagen Golf, after ditching the battering ram they used. No estimate of how much money was in the ATM was made.

“In addition to tracing the Volkswagen Golf, we would like to speak to the driver of a light-colored hatchback seen to be circling the A141 Slade End roundabout at the time of the offense to eliminate them from our inquiries. We have a partial registration plate of SR16,” Detective Sergeant Mark Plitsch was quoted as saying by Cambridge News. 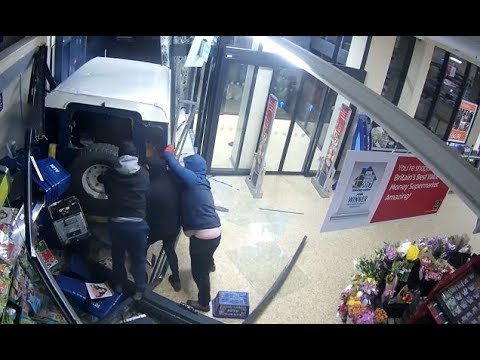