Move over Mercedes G-Class because we have a new favorite European 4x4. It's the Land Rover Defender, the new model that's modern yet extremely rugged. The Brits are off to a great start with this one, but we think the Defender family will eventually need to include something as epic as this 6x6.
3 photos

The new Defender was launched with everything a modern SUV needs. There's the base model with 3 doors and a short body and the 110 model with five doors. You can get it with a snorkel, tough wheels, air suspension, and a good variety of engines. Land Rover is also working on an extended wheelbase 130 model and a V8-powered model.

That last bit of technology would be necessary if we ever wanted a Defender 6x6. Obviously, you guys are only dealing with a simple rendering from India's SRK Designs. However, there's no denying both aftermarket fabricators and Land Rover themselves will be tempted to build this.

The previous Defender was as simple as a tractor but had been swapped to a V8 and fitted with six wheels. It's an excessive makeover, but not everybody wants to be reasonable. SRK's vision of a Defender 6x6 is also a truck and has subtle widebody modifications.

As a reminder, we'll point out that a little while ago, somebody made a LEGO version of this SUV that had tracks and a similarly stretched out body. Now, the UK-built 5.0-liter supercharged V8 would be enough to move something like this, seeing as delivers a decent chunk of power. However, if it's an aftermarket build, we'd want out Defender 6x6 pickup to be LS-swapped and supercharged.

For reference, check out the Chevy Silverado 6x6 and its 800 horsepower setup. It really does seem like two axles aren't enough for some people. The super-sized Chevy is owned by the largest potato farm in Wisconsin and costs just shy of $400,000. It seems you don't need that oil money after all. 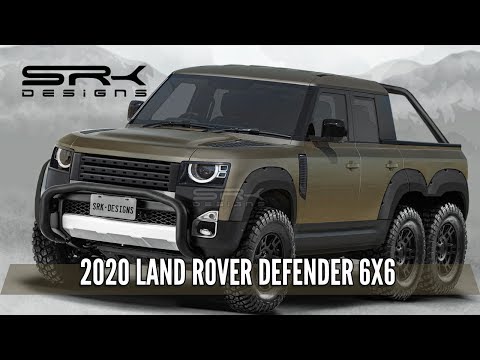