4 Ferrari-Engined Lancia Is Up for Grabs at Auction, Highest Bid Is Ridiculously Low

5 These Ferrari-Engined Cars Don't Wear a Prancing Horse
Car video reviews:
Up Next

In standard trim, the first-generation Lancia Thema was arguably one of the most uninspiring luxury sedans of the 1980s. Weirdly enough, in 8.32 guise, it was also one of the most exciting, not because it came with drastic visual upgrades (it didn’t), but because it was powered by a Ferrari V8.

Lancia Thema 8.32: The Forgotten Italian Sleeper With a Ferrari-Sourced V8 Under the Hood

The Thema might ring some familiar bells for our European readers since it was revived by the Italian manufacturer’s parent company, the Fiat Group (later renamed FCA, then Stellantis) in 2011 and attributed to a rebadged version of the Chrysler 300C.

However, that wasn’t the first sedan available with other carmaker badges that Lancia marketed under the Thema nameplate.

As you might or might not know, Lancia was one of the most renowned names in the Italian automotive industry during the first half of the 20th century. Founded in Turin by Fiat racing drivers, Vincenzo Lancia and his friend, Claudio Fogolin, the brand built some fascinating cars and was responsible for many innovations. An independent front suspension system that incorporated a hydraulic damper and a spring into a single unit, the first mass-produced, five-speed gearbox, or the first mass-produced V6 engine, all came from Lancia.

Unfortunately, financial troubles meant that the company’s era of independence came to an end in 1969 when it was purchased by the wealthy crosstown corporation, Fiat. In the decades that followed, Lancia would become a motorsport legend thanks to its ventures in the World Rally Championship (WRC), but, with a few notable, rally-derived homologation specials, its mass-produced models would begin to lose authenticity.

This was the case with the Thema, a sedan (and station wagon from 1986) that shared the same platform and most of the bodywork with the Fiat Croma, Alfa Romeo 164, and Saab 9000.

Launched in the fall of 1984, it was meant to be the luxury-oriented version of Fiat’s all-new Type Four platform and steal customers away from the likes of Audi, BMW, or Mercedes-Benz. Despite its high-quality interior, comfortable road manners, and decently-powered engine lineup, it never managed to become a serious threat to the aforementioned German brands, which led the manufacturer to discontinue it after a decade of service. That being said, Thema’s history book has one fascinating and often-overlooked page.

Although by 1986 it was pretty clear that the model was no BMW, Audi, or Mercedes-Benz slayer, Lancia executives decided to take it one step further and dip its toes into the increasingly-popular, high-performance sedan market.

Dubbed 8.32, the sporty Thema made its debut later that year, at the Turin Auto Show where those in attendance were in for a big surprise.

From the outside, the new version appeared to be just a regular model standing on five-spoke alloys. However, upon close inspection, the bespoke VR15 Goodyear tires that wrapped the new wheels, the twin exhaust pipes, and the electronically-retractable rear spoiler hinted that this was no ordinary Thema.

Things became clearer when the hood was raised and a red engine ornament that read “Lancia by Ferrari” met the eye.

Yes, the Fiat ownership meant that Lancia’s models would be part of the platform-sharing trend, but it also came with the possibility of borrowing components and expertise from other Fiat-owned brands like Ferrari.

Thus, instead of wasting time and money beefing up the Fiat V6, engineers sourced their engine from Maranello. The unit in question was a 2.9-liter Tipo F105L V8 initially developed for the 308 and Mondial Quattrovalvole. With eight cylinders and 32 valves, the engine would inspire the 8.32 moniker.

Interestingly enough, to adapt the powerplant for its transverse location under the hood of the Thema, several modifications including designing a new cross-plane crankshaft were performed by Ducati using Ferrari castings.

Mated to a five-speed manual and fitted with a Bosch KE3 Jetronic fuel injection system, the V8 could spit out 212 hp and 210 lb-ft (285 Nm) of torque in non-catalyzed form, which meant that the sedan was capable of accelerating to 62 mph (100 kph) from a standstill in 6.8 seconds. Yes, those figures aren’t all that impressive today, especially for a V8-powered, high-performance sedan, but during the second half of the 1980s, there weren’t many four-door rides that could do better.

Apart from the Ferrari engine, the 8.32 came with high-end features such as ABS, ZF's brand new Servotronic electronically controlled, speed-sensitive, rack-and-pinion power steering, and the retractable spoiler that I mentioned earlier. The latter was controlled by the driver via a rotary switch on the right stalk and according to the manufacturer, it improved the car’s overall stability when it was raised.

Even with this addition, the 8.32’s exterior wasn’t all that impressive, yet its cabin was a different story. Available as standard with handmade wood trims and handstitched Alcantara upholstery (or the optional Poltrona Frau leather) the interior was truly special. Once inside, it made you want to get out and check whether or not you’d climbed into the right car.

On the open road, the V8-powered Thema drove much like a Mercedes. The added oomph which came from the Ferrari engine was clear, yet it was smoothly delivered, making it feel like the perfect combination between a sports car and a luxury sedan. The standard suspension was extensively tuned while bigger disc brakes were added behind all four wheels to increase comfort and epitomize its high-end road manners.

The original Thema 8.32 was produced from 1986 to 1988 in 2,370 units. Another facelifted Series 2 model followed, but with stricter emission standards, performance dropped by 10 hp due to the addition of a catalytic converter. The Series 2 version was built until 1992 in 1,601 examples.

Like its standard sibling, the 8.32 never managed to become as popular as rivaling models, mainly because of its ugly exterior, steep price (nearly twice as expensive as a standard Thema) or the high-maintenance costs of the Ferrari engine, yet it was one of the most exciting high-performance sedans of the decade. It was so good that Enzo Ferrari used one as his daily driver.

You can learn more about this forgotten sleeper and see it in action in the video below by Harry's garage. 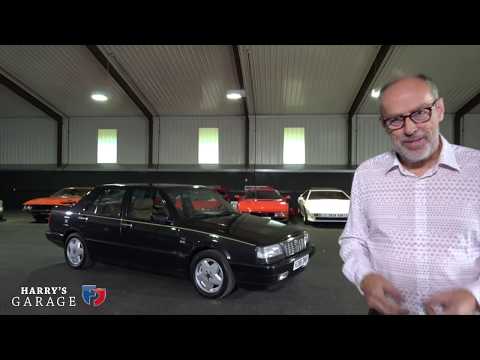