Lamborghinis Are Not That Precious to Younger Generation Drivers, Apparently

How do Obafemi Martins’ 4-year-old son and a YouTube teenager connect with Lamborghini? Well, one has a rich footballer as a dad, the other has millions of viewers watching him doing pranks and other foolish things. Both seem to have something else in common, the lack of appreciation drivers usually nurture for a Raging Bull.
7 photos

If you travel enough on the virtual planet of the world wide Internet, you may stumble upon all kinds of oddities. Some take the form of the absurd, others simply remain at the state of unanswered questions. These two cases relate to the latter.

Obafemi Martini is a 31-year-old Nigerian footballer who plays as a forward for Seattle Sounders FC and the Nigeria national team. Like most sports stars, he too shares the passion for fast cars. Among other impressive luxury rides he possesses, he seems to be quite fond of one in particular: a Lamborghini Aventador.

As it turns out, he likes to share his passion with his cute 4-year-old son, as the soccer player has posted numerously videos and images of the two hanging out in that car. All things natural so far, but one may wonder why the sportsman considered having his kid walk on the windshield of the parked 700 horsepower supercar. He even took a picture of him afterwards.

A similar lack of appreciation for a supercar can be seen by any of Taylor Caniff’s fans, considering the YouTuber, who appears to be some social media teen magus, doesn’t seem to care too much about his Lambo either. He took his Raging Bull - which is an older Gallardo for those who care to know - to West Coast Customs for a bit of refresh. As you can see in the image above or the vlog below, Cardiff went the whole nine yards with the purple nuances that should somehow turn the sportscar into a "Galaxy" Italian exotic.

Putting all Lamborghini owners in one group is not a reasonable move to make, but looking at these two examples one may wonder whether or not Lamborghini still receives the respect and appreciation it deserves from the younger generation drivers. 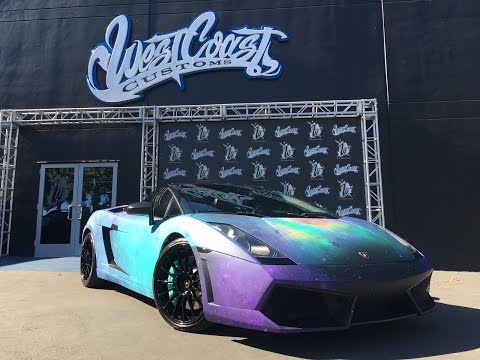