Lamborghini Urus Spotted Testing With Center Locking Wheels, Is This a Track-Ready Model?

Cristian Gnaticov
Head to the roads surrounding the Sant’Agata Bolognese facility in Italy and you are bound to see Lamborghini’s test drivers put pre-delivery miles on customer cars.
9 photos

This is what the uploader of the video shared at the bottom of the page thought he was looking at, until he zoomed in on a green Lamborghini Urus, spotting the center locking wheels. The feature is mostly used in motorsport, as it allows for faster pitstops, but this isn’t a racer.

So, why is the company testing such a gimmick? And more importantly, are they planning on making it an option for the facelifted iteration of the super SUV that’s currently in development?

The 2022 Urus, if you forgot, is rumored to gain a track-focused derivative, presumably named the Evo, with enhanced aerodynamics, more power, and less weight compared to the current Urus, and this one seems like a good candidate to get the center locking wheels.

A plug-in hybrid variant of the facelifted Urus is also expected to join the family, allegedly sharing the powertrain with the Porsche Cayenne Turbo S E-Hybrid. In its German cousin, the twin-turbo 4.0-liter V8 works with an electric motor to develop a combined 670 hp, rocketing it to 60 mph (97 kph) in 3.6 seconds. The electrified Urus is believed to boast in excess of 800 hp, yet we wouldn’t hold our breath for it, as around 700 hp sounds more plausible.

When it finally debuts, likely in a few months, the 2022 Lamborghini Urus will have updated looks. The changes will revolve around the front and rear bumpers, and lighting units, though we wouldn’t be surprised if they tweak more parts. On the inside, it should sport more upholstery options for better personalization, and probably an updated infotainment system software, which would make it feel more modern. 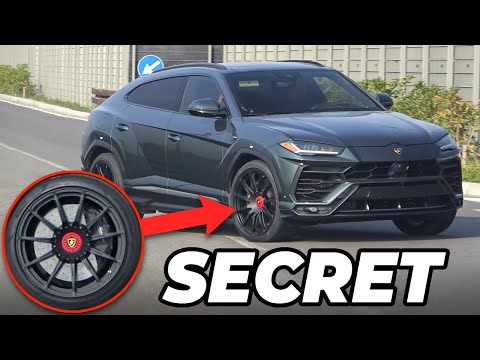