2 Lamborghini: The Man Behind the Legend Movie Trailer Is All About Lambo vs Ferrari

5 The Carnage of Metal, Flesh and Magnets of 6 Underground
Car video reviews:
Up Next

A classic but incredibly inspiring from-rags-to-riches story, the ever-motivational underdog tale that spills into another legendary automotive story, the story of the man behind one of the most exclusive and high-performance car marques in the world, told with help from an industry-recognized cast, a brilliant director, and the support of the Lamborghini estate. What could possibly go wrong?

Lamborghini: The Man Behind the Legend Movie Is Not Worthy of the Lamborghini Name

Where Lamborghini: The Man Behind the Legend is concerned, the answer is everything. Everything that could go wrong with a biopic, despite the brilliant premise, does go wrong. But the movie’s biggest flaw is that it essentially fails to deliver on the promise in the title: there is no look at the man behind the legend. The legend itself is hardly explained – that is, beyond assuming everyone in the world knows the Lamborghini name.

Playing in select theaters and streaming on Apple+ as of November 18, Lamborghini: The Man Behind the Legend has been in the works since at least 2016, though you’d hardly be able to tell from the end result. Directed by Bobby Moresco off a screenplay he wrote, it stars Frank Grillo as the titular character, Romano Reggiani as the younger Ferruccio Lamborghini, Mira Sorvino as Annita, his second wife, Gabriel Byrne as Enzo Ferrari, and a bunch of other people you will forget almost as soon as they leave the frame.

That’s because the film barely bothers to tell an engaging story. Despite working off an excellent premise, this is a Wikipedia biopic in the worst sense of the phrase, more concerned with checking off certain timelines than actually telling a good story that would be worth 97 minutes of your life.

It doesn’t help that the acting is bad, that Moresco strangely insisted that every actor put on a fake Italian accent, that there is no chemistry between the co-stars, no emotional depth to any of the characters, no character development or backstory, and ultimately, no purpose for all this. It’s as if the film throws every trope in the filmmaking book at the screen and hopes that something, somehow, will stick. It never does.

The story begins right after World War II, with a young and very handsome Ferruccio returning to his hometown and his father’s farm with empty pockets but a head full of ideas. In the post-war economic boom, he could make a fortune by building tractors, machines that would be smaller than what competitors offered, less expensive to buy, run and maintain, yet solid enough for even companies to get them by the dozens.

Ferruccio may be a penniless dreamer, but he is not without support: his mechanic friend Matteo (Matteo Leone) and his fiancee Clelia (Hannah van der Westhuysen), the woman whose specter will supposedly follow him for the rest of his life – and maybe turn him into a womanizer? A madman in pursuit of automotive perfection? An absentee father and a rather crappy human being? Who knows. The film doesn’t bother to explain, maybe because it has no idea, but it certainly hopes that the viewer will fill in the gaps on his or her own.

Important milestones are glossed over in the most casual ways. Again, it feels like Moresco is running through a checklist: the first Carioca tractor introduced the Lamborghini hybrid fuel system, where it would start using gasoline and then switch to a cheaper fuel alternative; the V12 that was built for the GT 350 production car shown at the 1964 Geneva Auto Show (the prototype Lamborghini 350 GTV is not even mentioned) is explained in the vaguest terms; the first-ever Miura’s most memorable quality is that Ferruccio put some woman’s eyelashes on the headlights; Lamborghini’s drive and motivation are merely hinted at.

The very rivalry between Lamborghini and Ferrari, which is hinted at right at the beginning of act one by means of an imaginary race between the two men at the wheel of their respective cars, and which got Lamborghini into building cars, is only used as a pretext. The promise made with this fake car race is never fulfilled, and, save for one brief interaction between the two, the rivalry exists only as another checkmark on that checklist.

To complete the list of cliches, Lamborghini: The Man Behind the Legend throws in romanticized storytelling and romanticized images of Italian life. It is packed with fake-looking props, but beautiful cars, gorgeous scenery, bad CGI, and occasional shoddy camera work meant to deceive the viewer into seeing a larger set. Even car action scenes are criminally bad, either too short or filmed at a slow speed.

At 97 minutes, the film is definitely not long, but it feels too long. It also feels as if you’re watching a group of (gorgeous) men and women pretending to be actors pretending to star in a movie about real people and doing a terrible job at it.

There is no reason why Lamborghini: The Man Behind the Legend exists. It doesn’t tell the story of the man behind the legend because it doesn’t tell a story at all. Ferruccio Lamborghini was not a controversial man, and he was definitely not as handsome as the very muscular Grillo, who looks very much like he does in every other movie, except for the bad accent and the clear desire to make this work, against all odds. But Ferruccio Lamborghini was an innovator. He was a dreamer and a perfectionist, a savvy industrialist who saw room for improvement (and profit), and got s**t done, if you’ll pardon the French, laying the brickwork for one of the most revered marques in the world.

Ferruccio Lamborghini deserved better. Everyone involved, including the viewer, deserves better than what Lamborghini: The Man Behind the Legend delivers.

Rated R for some language, Lamborghini: The Man Behind the Legend is now running in U.S. theaters and streaming on Apple+. 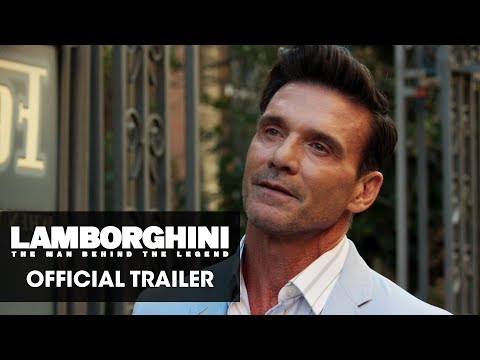