4 Modern Ferrari Breadvan Is a 550 Maranello "Wagon", Has a Gated Manual

5 Manual Gearbox Lamborghini Huracan Is a World First, Shifter Is Gated
Up Next

Cristian Gnaticov
You can keep your ultra-fast Teslas, modern rides with huge screens inside, and small crossovers, and sign us up for a blue-blooded exotic with a gated six-speed manual transmission, like this 2003 Lamborghini Murcielago.
9 photos

Equipped with the sought-after stick shift, which is no longer part of the Raging Bull’s portfolio, it also has something else that Lamborghini officially ditched: a screaming V12 mounted behind the seats. The naturally aspirated engine has a 6.2-liter displacement in this configuration, making a little over 570 horsepower.

Mind you, that will soon be mega hatch territory, but no modern compact can give its occupants the same thrills. With someone who knows how to work the springy shifter, you are looking at less than 4 seconds needed to hit the 60 mph (97 kph) mark from a standstill. It can accelerate from rest to 100 mph (160 kph) in a little over 8 seconds and can hit 150 mph (240 kph) in almost 21.5 seconds.

On a long stretch of road, you will eventually see 206 mph (332 kph) on the speedometer, as long as the legislation allows it, of course. For a car born almost two decades ago, it’s unbelievably quick, as it can deal with the quarter mile in a hair over 11.5 seconds, at 122 mph (196 kph).

The interior has aged like a fine wine. It has soft lines and no big screen mounted in the middle of the dashboard. The HVAC system is hidden away from sight, and you also get electric windows, a nose-lift to get over speed bumps, and a traditional handbrake lever to the left. This one features black leather upholstery, and it’s an absolute gem.

But enough talking about it, as you’re likely here to see it on the move, from the driver’s perspective, and for that, you will have to watch the video embedded after the small jump, which is 14 minutes long. 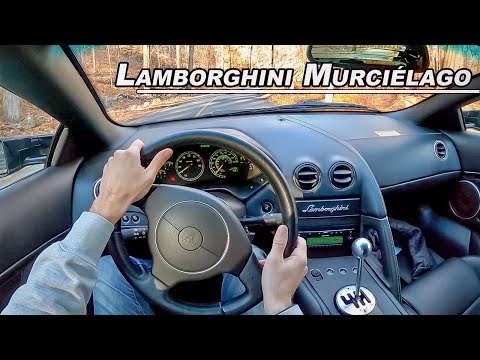