2 Lamborghini Aventador SV Drag Races Rallycross Race Cars, Is in for a Surprise

4 Employee of the Year Material: Man Crashes Boss' Lamborghini While High on Coke

This Is the Tiny House Version of a Motorhome, The Moormann Minimalist VW Streifenwagen

In the wake of the stricter emission regulations, the fate of the naturally aspirated V12 engine is sealed. The death knell is about to sound for the sonorous mill, forcing exotic automakers to apply some fake trickery to enhance the soundtrack of their expensive rides.
6 photos

Ever since the Miura, which came out back in 1966, Lamborghini’s flagship supercars have rocked a V12 engine. This was also the recipe for the Countach, Diablo, Murcielago, and modern-day Aventador, which has already bid farewell to the twelve-cylinder unit with the Ultimae Edition.

Don’t go crying in your pillow yet, because as long as there will be true petrolheads on the planet, the Raging Bull’s V12-powered supercars will continue to hit the used car market, long after the automaker would have officially retired the lump, some of them more expensive than others, yet that’s a totally different topic.

Now, everyone and their mother knows that the Aventador is quicker than the Murcielago, but which of the two sounds better? Putting the spotlight on the V12 symphony of the two cars is a video shot in Italy, which shows a rev battle between the SuperVeloce (SV) versions of the previous- and current-generation supercars, and choosing an actual winner is easier said than done.

So, which one do you think sounds better? We’re tempted to say the Murcielago, though we’re not convinced. What say you? 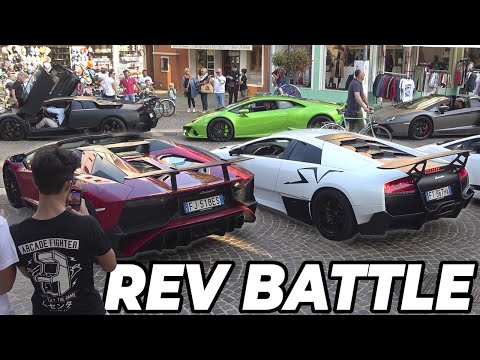