Vlad Mitrache
Ever since the company's first production model was introduced, the ill-named MP4-12C, McLaren has quickly made a name for itself in stock-car drag racing despite sticking to rear-wheel-drive and relatively small displacement engines.
1 photo
The norm with drag racing these days is to have a car with all-wheel-drive and good launch control that can minimize wheel spin off the line and put all the power where it matters at all times. The shorter the race, the more important grip becomes.

It's the reason why Teslas have been doing so well ever since their introduction. You have a car with one electric motor on each axle that delivers its maximum amount of torque instantly and can be controlled by a computer with incredible accuracy to keep power supply just below that level where friction is lost.

However, even though a McLaren is almost as different from a Tesla as anything that still has four wheels can be, the British-made supercars still demand the utmost levels of respect whenever they enter a drag race. Despite losing to the new Porsche 911 Turbo S in the quarter-mile race, the McLaren 720s still is one of the best choices for a 1/2-mile race, and even though you might not win them all, at least you're guaranteed not to make a fool of yourself with any McLaren/race length combination possible.

So, does a Lamborghini Huracan Performante Spyder stand a chance? According to the "on paper" calculations, the answer is "yes." Just barely. Both cars have a claimed 0-62 mph (0-100 km/h) acceleration time of 2.9 seconds, but a quarter-mile race doesn't end with 62 mph. What happens beyond that is anyone's guess, though we suspect you can imagine as well.

The Lambo, with its superior power and all-wheel-drive system, will definitely have the edge during the early stages of the race. However, once the McLaren doesn't need to limit its power to maintain traction and can stretch its legs at will, the Italian has every chance of seeing the back of that 620R.

Like any drag race, the build-up takes much more than the action itself, but with two cars such as these - the most track-oriented Huracan out there (albeit in Spyder form) and the R version of the always wonderful 620 - any second of their on-track duel is worth it.

As always, we're not going to spoil anything, but having the Great Britain flag mark the start of the race is somewhat foretelling considering one of the contenders is made by a British company. Or is it? You'll just have to watch and see. 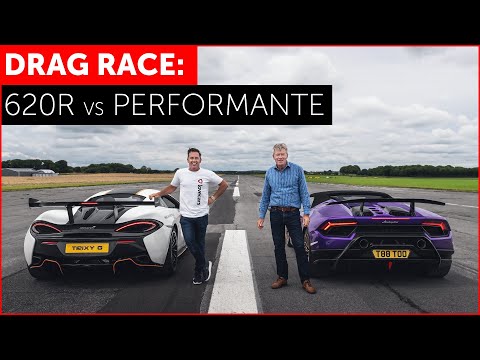