All-wheel drive versus rear-wheel drive, free-breathing V10 against force-fed V8, Italian styling and German precision at odds with British engineering and Formula 1 expertise. The Huracan Performante and 600LT couldn’t be more different, but on the other hand, they’re playing in the same class for the same type of customer at similar price points.
26 photos

The question is, which one takes the bragging rights in a straight line? On paper, the Macca needs 2.8 seconds to hit 60 miles per hour (97 kilometers per hour) while the Raging Bull can reach that speed in 2.6 seconds. Of course, these numbers have been exceeded in real-life scenarios on many occasions with the bone-stock internals and factory-supplied rubber.

Car vlogger Speed Phenom had the opportunity to compare his 600LT against the Performante at Coalinga Airport in California, and obviously enough, the McLaren has a hard time launching consistently. The rear tires spin too much because torque peaks low in the rev range and because they’re 285-section wide as opposed to 305 for the Lamborghini. Rear-wheel drive also makes launching harder than all-paw drive, and that would be the gist of it.

If you give them corners, the Macca is likely to lose time as well, but don’t forget which of these supercars is the most engaging to drive. The 600LT also happens to be much rarer than Lamborghini’s aero-crazy Huracan Performante because production was limited to around 12 months.

The same applies to the 600LT Spider, which is just as collectible if not a little more thanks to the retractable hardtop. Topped by the 620R special edition, the Sports Series line came to a grinding halt last year when McLaren stopped production. In its place, the comfort-oriented GT and plug-in hybrid Artura will have to make do. As for the Italian marque owned by Volkswagen, the Huracan’s successor will hybridize just like the Aventador’s replacement. 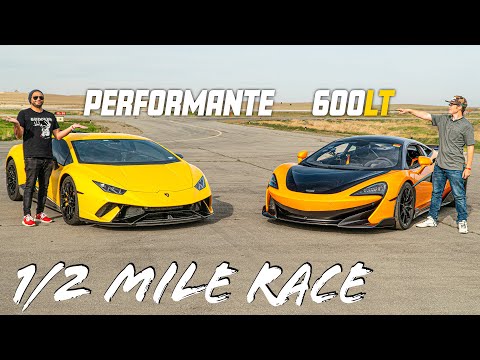