5 Audi Q7 V12 TDI Hits 172 MPH on the Autobahn, Proves Its an Original Super-SUV
Car video reviews:
Up Next

It may seem as though there aren't that many ways in which you can make a supercar—powerful engine in the middle, two seats up front, aggressive aerodynamics—and yet the selection isn't just vast, but also quite varied.
9 photos

Take the McLaren 600LT and Lamborghini Huracan EVO, for example. The first major distinction is that the McLaren has a closed cabin, whereas the Lamborghini is of the Spyder variety. The most likely scenario is that this wasn't planned but rather dictated by circumstances; still, the matchup turned out to be balanced enough.

Styling-wise, though, it's as unbalanced as they come. We're not sure whether the McLaren is really that sexy or we've just gotten so used to the Huracan that it's not doing it for us anymore, but we know very well which one we'd put on a wall in our house. As a poster, of course, what kind of a house do you think we have?

Look under the engine covers, and you'll find plenty of other talking points. This pair has nothing in common when it comes to powertrains. The 600LT uses McLaren's 3.8-liter twin-turbo V8, whereas the Lambo gets a 5.2-liter naturally aspirated V10. Outputs? 600 metric horsepower (592 hp) for the 600LT (duh!) and 640 PS (631 hp) for the Huracan. Knowing McLaren, the power figure is conservative, to say the least, but the fact it sends all that power to the rear wheels only (unlike the AWD EVO Spyder) means it'll have a hard time finding traction off the line.

Indeed, the British sports car falls short of meeting its official 0-62 mph (0-100 kph) acceleration time of 3.2 seconds, going 0.3 seconds over. Meanwhile, the Huracan EVO somehow manages to improve the number written in its specs sheet under acceleration (3.1 seconds official, 2.94 seconds field result) by more than one-tenth of a second. Strange, we know, but that's what the Dragy GPS performance measuring device claims.

For the next milestone, the 0-124 mph (0-200 kph), the roles are reversed. With the grip issue resolved, the McLaren is free to deploy its famous rabid acceleration, reaching the target velocity in 9.06 seconds, almost half a second quicker than the Lamborghini (9.52 s). However, that doesn't seem to help it too much as the Huracan is still the first to complete the quarter-mile—the most important benchmark of them all—beating the 600LT by 0.25 seconds.

Hit the play button below if you want to see and, just as importantly, hear these two stretching their legs on the German Autobahn. 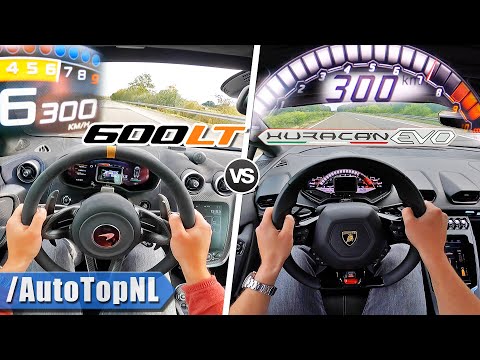