Vibe Motorsports Has a Pair of Rims for the Lexus RC350 F-Sport, Sexiness Granted

Gabriel Nica
The Lamborghini Huracan is currently regarded as the ‘affordable’ choice from Sant’Agata Bolognese. Don’t get it twisted though, it doesn’t mean anyone can go out and buy one but it just translates into a cheaper alternative to the Aventador.
1 photo
As we learned from our reviews of the two, there are quite a number of differences between them but even so, the Huracan is still a mighty supercar. That being said, it will attract a lot of buyers and they will surely want to know all about its straight up performance.

According to the raging bull company, the 0-62 mph (100 km/h) acceleration of the V10-powered beast takes just 3.2 seconds. That’s thanks both to the 610 HP it develops but also to the all-wheel drive system on board. What’s interesting is the fact that those numbers are identical to those of an Audi R8 V10 plus.

The main difference between the cars is the price tag which, as expected, is considerably lower on the Audi. After all, you do get a different car on the outside, no matter how close they are on the track.

In the video below, we get to observe the Huracan going not just up to 100 km/h (62 mph) but to twice that fast, 200 km/h (124 mph) to be more precise. It should also be mentioned that this was done using the Thrust Mode.

That’s the equivalent of Launch Control on every other performance car on the planet. The Italians, wanting to be special, called it Thrust Mode but trust us (pun intended) when we tell you it’s the same thing.

So just how fast did the Huracan reach that benchmark velocity? You’ll just have to watch and count, I guess... Let us know what number you ended up with so we can compare. 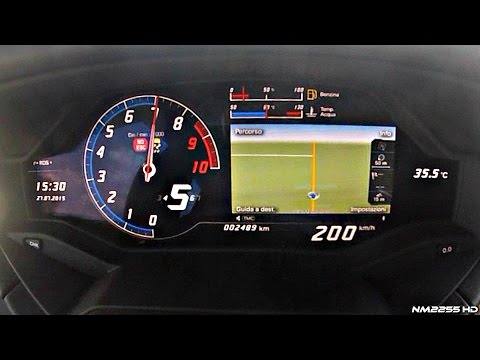