After showing you what a truly bespoke paint job is with a BMW X6 that hid a painting of the Hulk on its bonnet, it’s time to take a look at yet another such creation. Coincidence or not, we’re dealing with another member of The Avengers, this time one that’s more... earthly.
1 photo
We’re talking about Captain America or Steve Rogers on his ‘real’ name. Just like in the case of the Hulk, the image of the soldier was hidden under a heat-sensitive layer of paint. What that means is that it’s exposed only when you throw hot water on it.

The effect is quite spectacular and we really have to tip our hats to the man that actually drew the superhero because he really did an excellent job. The whole thing was put together by the guys from XClusiv Cars and the portrait was drawn by Rene Turrek, the same guy behind the ‘Hulk X6’.

As for why would someone do this, it’s hard to find a reason. The problem is that you have to use hot water for the trick to actually work and there are few to no real-life situations when this happens.

Even so, the amount of awesomeness of this thing is over 9,000 and we simply have to applaud the man for his work. Now as to how much such a paint job would cost, we haven’t the slightest idea. We do think that it’s definitely not cheap, however, just drawing the Captain America figure with so many details probably taking days if not weeks. 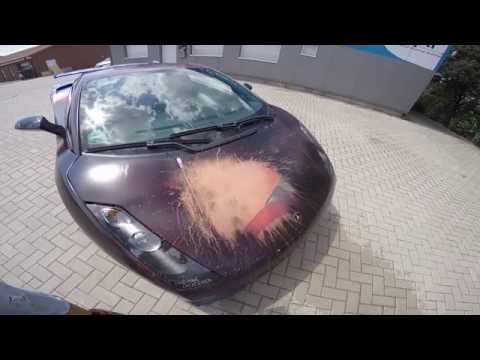