3 Ducati's MG-20 Proves That a Magnesium e-Bike Is Possible, It Also Folds Down

Twin-Turbo Lamborghini Huracan Has More Power Than a Chiron, No Bids Yet

Did you honestly think that one of the best-known manufacturers of super sports cars would not, in some way, jump on the e-mobility game too? Well, in case you didn’t know, Lamborghini does have its logo on a folding e-scooter.

That scooter is named the AL1. Simple, short, and to the point. But as you’ve understood by now, it’s an electric scooter from none other than Lamborghini and MT Distribution (MTD). Wait a minute, where have we heard of MTD before? Oh, that’s right! They're the same team that has recently worked with Ducati to bring their folding magnesium e-bike, the MG-20, to life, among countless other e-mobility vehicles.

As for the AL1, this scooter is composed of the same material as the MG-20, magnesium. Not the entire scooter, but the frame. Why magnesium? Well, it’s light, it’s strong, and looks like it may be "the next aluminum" for countless industries. Overall, the entire scooter comes in with a weight of 13 kg (28.6 lbs), battery, motor, and all.

One thing you may enjoy about this EV is its sleek and minimalist design. None of it seems too bulky, and even the steering column has a sort of attraction to it. If the attraction isn’t based on design, then it might be because of that golden bull shimmering at you. Also built into the frame are LED lights, keeping you visible on the road.

What Lambo and MTD chose to do on the AL1 is strap the motor onto the front wheel; 350 watts of brushless power is at your disposal. With this little powerhouse, three different riding modes are available, but a maximum speed of 25 kph (15.5 mph) is the limit. Good news is that this limitation is probably software regulated, and someone who knows what they’re doing might be able to break that speed limit. Even so, 12-degree hills won’t be a problem for this little motor.

Powering everything is a battery of course. To keep you rolling for about 30 km (18.6 mi) is a 7.8 ah, 280 Wh battery. However, this range is affected by several factors. Weight of the rider, road conditions, external temperature, all seem to play a factor here. But there is a display to keep you updated on range and battery levels. As for the battery placement, it’s in the footboard, like most other e-scooters around.

One important feature of the AL1 are its wheels. Solid rims with 8-inch honeycomb tires eliminate the worry of ever getting a flat tire. Now, tires like these aren’t always the softest ride around, so Lambo and MTD dropped a suspension on the front of this scooter, just enough to smoothen out your ride.

To make sure you stay safe while cranking around on your “Lambo,” two braking systems are provided. An e-brake and a classic mechanical brake should offer an ability to stop rather quickly. Oh, and the LED lighting I mentioned earlier includes a headlight, taillight, and side lights.

In case you’re riding your AL1 to work, remember, it folds, offering neat and simple storage. Like most e-scooters around, at the bottom of the steering column, a latch allows the scooter to fold. You can take it with you into an elevator or store it under your desk.

Top everything off with Android and iOS connectivity, and you’re good to rock this little sucker around town in you Armani suit and loafers. For a mere €500 ($593 at current exchange rates), you too can own an AL1. Small price to pay for that golden bull on your EV.

Here’s the catch to all this. If you end up on the manufacturer’s website, you’ll see that there is a section marked “Catalogues.” Now, is it just me or does it look Lambo has bigger plans? 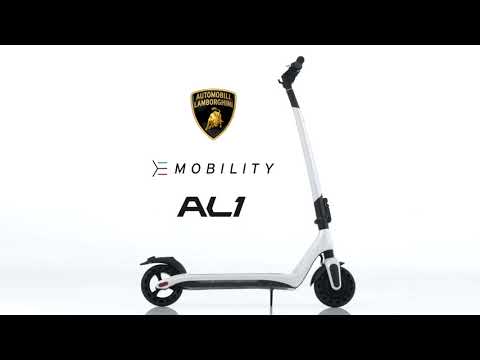