Airstrip, race driver (and a friend), plus a couple of the most potent and expensive SUVs in the world. Come to think about it, a meeting between a Lamborghini Urus and a Rolls-Royce Cullinan shouldn’t be a surprise at such a location.
38 photos

After all, owners will probably end up seeing each other’s rides on their way to their private jets. But this time around, unlike on other occasions, no planes are visiting Daniel Abt’s latest video (embedded below). Instead, the Urus and Cullinan gathered on the little airstrip for a challenge that wasn’t unexpected, though it remains highly unlikely in the real world: a drag race (or two, as well as a rolling battle).

Come to think about it, a Rolls-Royce Cullinan doesn’t stand a chance against the hulking-yet-nimbler Lamborghini Urus. After all, the latter was built as the ultimate “Super SUV,” while the former is the successful “Magic Carpet Ride” response to Bentley’s Bentayga. Still, the German racing driver (English subtitles are available) tried to make this race as fair as possible, bringing in a Cullinan Black Badge for the quarter-mile skirmish.

A quick look at the technical cards (seen at the 1:35 mark) will easily showcase this is still one highly unbalanced encounter. The Cullinan Black Badge is way heavier than Lambo’s Urus, severely overpriced, and also a tad underpowered. But is anyone going to miss the fun? We didn’t think so either, because it’s not every day you get to see a hulking luxobarge getting shamed... by another bulky/expensive/almost-just-as-irrational SUV.

So, without further ado, the first drag race round kicks off at the 4:54 mark, after the customary sound check. As expected, the Urus takes the lead from the very beginning, no matter the Cullinan’s Black Badge enhancements (“additional power and torque, fine-tuned dynamic handling”). The Rolls-Royce takes an equally severe “beating” during the second round from the 6:09 mark, and not even the roll race has the power to change the (equally) obvious outcome.

Actually, we could have seen – or rather hear – this flawless victory from the onset, as the sound battle (from 3:20) was easily and decidedly won by the Italian luxobarge SUV representative! 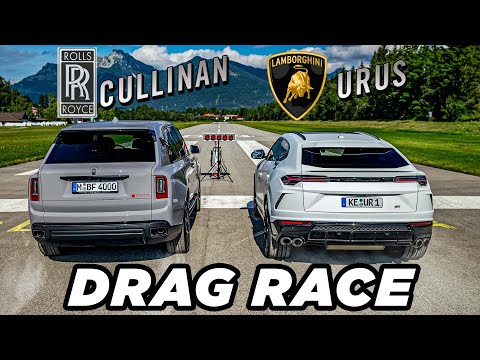