1 This Is Lamborghini's Own Aero Package For The Huracan

4 Lamborghini Murcielago Does the Crash-Dance in Wet Russian Traffic

Lambo Aventador Almost Runs Over Cameraman on the Drag Strip

Vlad Mitrache
It's not easy filming drag races. On the one hand, there aren't a lot of ways you can manifest your creativity: it's a straight strip of asphalt with two cars racing alongside each other. There aren't that many angles from where to capture the action while still being relevant to what's going on there.
1 photo
On the other hand, it all happens so fast that you must be on your toes at all times. Miss pressing that button on time and you could lose the start, which is one of the important moments of the race. Take too long lighting a cigarette because of the strong wind and you could miss a run altogether. Filming these events takes as much focus as actually taking part in them.

Of course, you can always leave the camera on a tripod covering the start, the track, and, somewhere in the distance, the finish line, and then do whatever you want. It's almost like switching on the Autopilot: in most cases you're alright, but if you fall asleep and that same wind knows over your camera, you're going home empty-handed. Or, depending on how the rig falls, with the races filmed from a very "unconventional" angle.

That's why we should probably show some sympathy towards this cameraman who almost got killed by a Lamborghini Aventador LP750 SV. He decided to cross in front of the two racing cars just as the lights were turning green - a decision he regretted instantly, but with a 750 horsepower car galloping towards you, there's no time for anything else than evasive maneuvers. Luckily, the Aventador driver had the same idea, and he managed to swerve right just in time and, by the looks of it, still win the race against that Corvette - though a re-run was probably in order.

Not running before two cars that are preparing to accelerate as hard as they can should be a no-brainer, especially for someone who isn't probably for the first time on a drag strip, and yet this happened. If it weren't for the driver's reflexes and composure, it could have ended a lot worse. 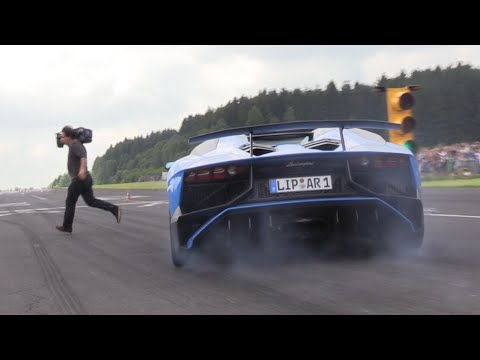