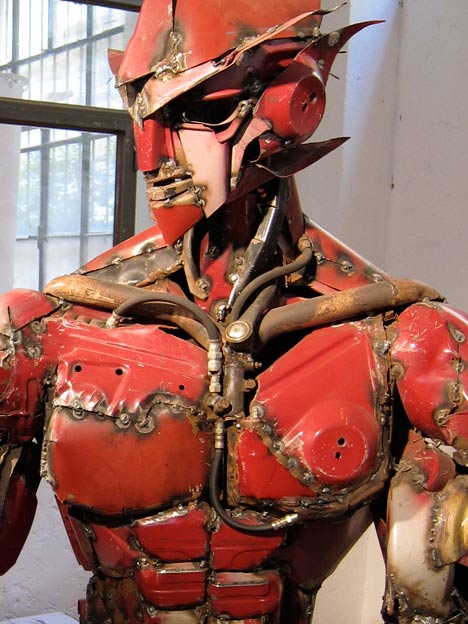 We know that most of you are Transformers fans and that having some two or three cars at your disposal to turn into giant robots has been a dream of yours from ever since you first laid eyes on the famous toy line, but we bet you never actually gone through with such a plan. However, since there's a beginning for everything, we present you The Transformer.

And no, it's not somebody's own version of the third and final film in the live action Transformers series, but a special project developed by Studio Re-Creation.

Studio Re-Creation has taken what used to be a Lada Samara Diva and turned it into a 2-meter, 90kg warrior, developing one of the most impressive car-robots of all time. Which kinda makes you wonder why take your car to the junkyard or trade it in for a few hundreds of dollars when you can spend some quality time developing your own robot.

Studio Re-Creation did not disclose the time it took to weld and sculpture The Transformer, but what we can say for sure is that it's certainly worth it. What they did mention, however, was that the project “symbolizes the relationship between man and machine.”

This is not the first time Studio Re-Creation tries to make something out of the ordinary using everyday things that people take for granted. Some of their past projects comprise a rabbit and a dog made out of pieces of old wooden furniture, a lamp built from elements of a chandelier and glass sticks and a classic chair covered up with broken dishes.