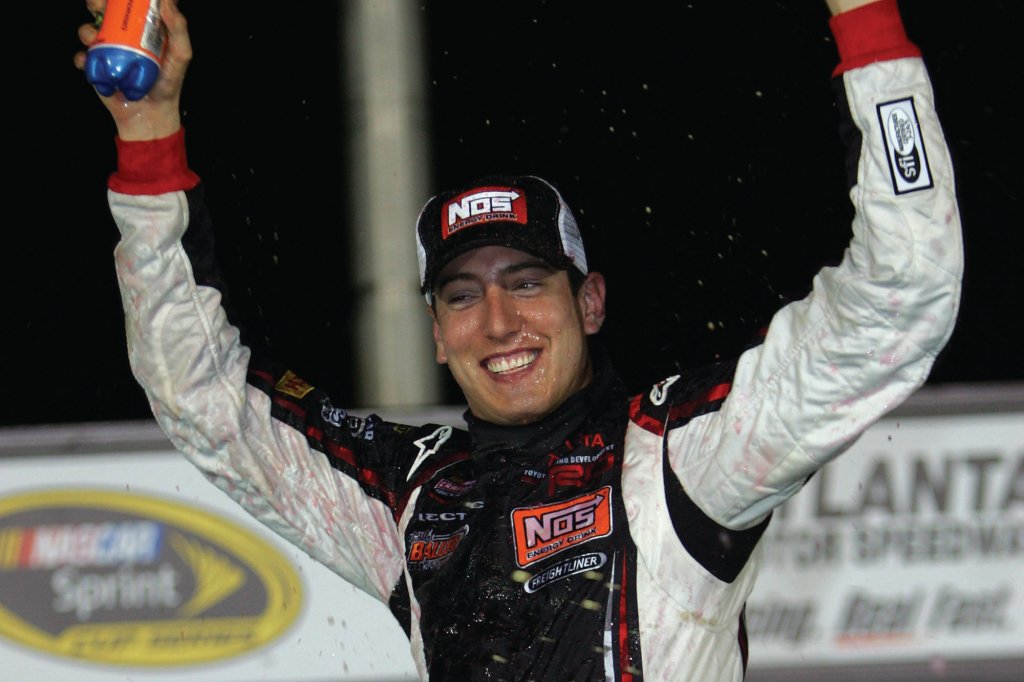 Kyle Busch won the Stater Bros 300 Nationwide Series race at Auto Club Speedway on Saturday. However, this was not the biggest news of the weekend. The real piece of information is that the driver of the No 18 Joe Gobbs Racing has done the job only hours after winning the Camping World Truck Series event at the same track.

Busch therefore became the first driver in history to score two wins in any of the NASCAR top series – Sprint Cup, Nationwide and Truck – in the same day. He had tried pulling the same stunt two years ago, as he nearly doubled his Daytona N’wide win that year with a 1st place in the Sprint Cup race hours later. However, he felt short of 0.005 seconds to 2007 Daytona winner Jamie McMurray.

"It's awesome. This is just a blast. It's pretty special to beat guys like Carl [Edwards] and Kevin [Harvick]. To win here twice in one day is even more special,” said Busch after winning his 2nd day of the weekend. He’s also in play for the first NASCAR sweep in history, as he will also be attending the Cup race later today (starting from 10th overall).

Having led most of the race until Lap 135, Busch was briefly challenged for the lead by Ford’s Carl Edwards and Chevy’s Kevin Harvick. The three drivers went three wide entering Turn 2, but the Toyota driver managed to get in front of his rivals in the next 2 turns to finally secure his 1st place. He never let go until the finish line, finishing in front of Harvick and 3rd placed Joey Logano.

“"I was able to sneak by Kyle and Carl when they got together there [on the restart] - at least that's what it looked like from my perspective. I just couldn't quite complete the pass there,” argued Harvick after the race.

“Definitely, the best car won - that's for sure. That was amazing. Kyle was just in a league of his own [Saturday night], so it was tough to be able to hang with him for most of the night,” added Edwards.

The Sprint race is scheduled for later today, with Jimmie Johnson scheduled to start the Auto Club 500 from pole position. Brian Vickers had rightfully earned the 1st place on the Sunday grid during the qualifying session, but he was forced to change his engine and therefore lost his starting position for the Sunday race.