1 KTM's RC8 Will Be Sold in Limited Edition
Editorial 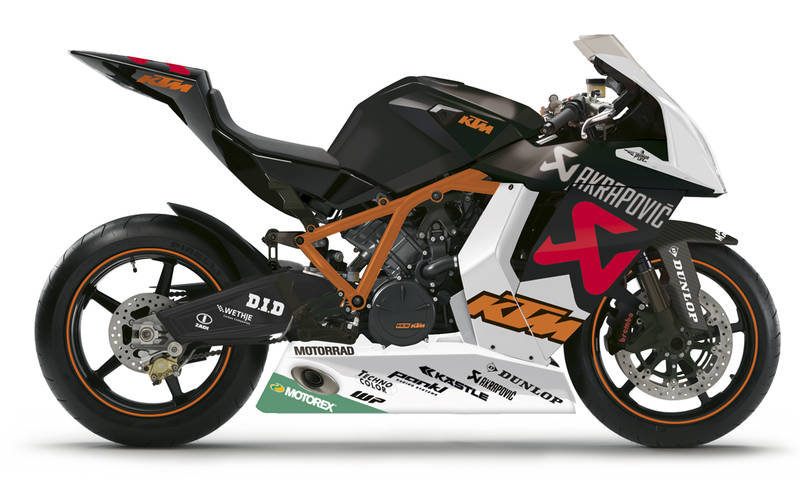 The 1190 RC8 R McWilliams replica has just been launched by KTM, a bike that will be produced in a limited 100 units, named after Jeremy McWilliams who's racing for the KTM-Akrapovic in the IDM German Superbike Championship.

The limited edition McWilliams bike is fully equipped with KTM's Club Racer kit, including the Akrapovic EVO4 exhaust system, hi-lift cams and datalogging. This race replica developing about 180 horsepower is licensed for both road and track usage.

Jeremy McWilliams will be onboard a third KTM RC8R Superbike for the KTM-Akrapovic Team as of Assen , joinning KTM's Stefan Nebel and Kai-Boerre Anderson, who stands in for the injured Didier van Keymeulen on the starting line at the traditional Dutch circuit.

The 45-year-old rider has achieved several successes in road racing and because of his high level of technical and racing competence, has been a test rider and racer for many MotoGP and Superbike teams.

Kai-Boerre Andersen will also be making his debut on the Red Bull KTM RC8R at the same time McWilliams. The Norwegian is the official replacement for the regular team rider Didier van Keymeulen who must undergo surgery on his injured hand and is therefore out for the rest of the season.

KTM thus deploys a third officially-supported motorcycle in the IDM (International German Superbike Championship) together with the exhaust systems manufacturer Akrapovic. The renowned Slovenian manufacturer has been one of the closest partners of the Austrian sports motorcycle manufacturers for many years.