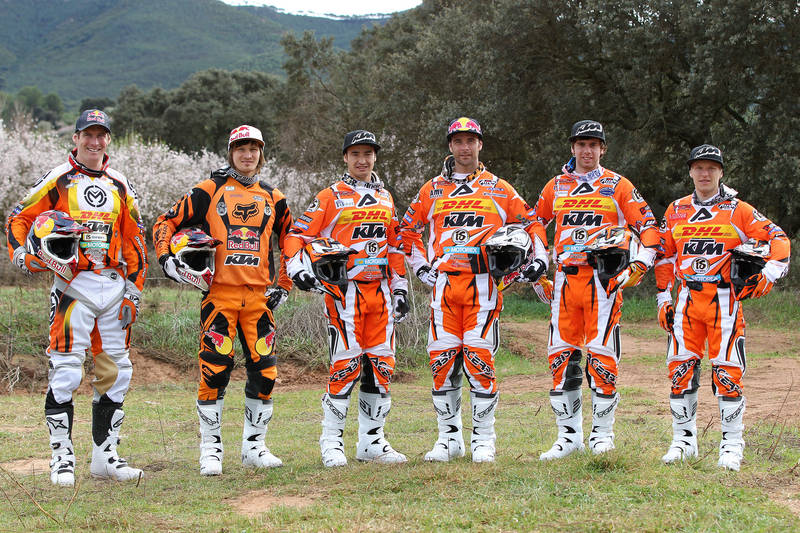 Austrian manufacturer KTM has recently introduced its Enduro Factory Team rider line-up and machines for the 2011 season at the World Championship Indoor Enduro event in Barcelona, Spain. Eero Remes of Finland and Italian Thomas Oldrati are contesting the E1 class on the 250 EXC, Johnny Aubert of France and Cristobal Guerrero of Spain will ride in the E2 class on the new 350 EXC-F bike, while David Knight will contest the E3 class on the KTM 500 cc 4-stroke.

Knight will be joined in this class for the first three events in Spain, Portugal and France by KTM's extreme Endurist Taddy Blazusiak of Poland who will ride the 300cc 2-stroke machine.

"We are very positive about the 2011 Enduro bikes and our riders can hardly wait to get out on the track and tackle the competition," team boss Fabio Fairoli said in a statement for the press.

"2010 was good to us. We won one of the top titles and we had all the riders on the podium. Now this year, like every year, we start with the aim of winning all the titles. I am very hopeful about our prospects and this includes our two young riders, Thomas Oldrati and Cristobal Guerrero who both have the potential to be on the podium," added Fairoli.

The 2011 season starts on the Iberian Peninsula with rounds in Spain and Portugal then heads south to Italy, Turkey and Greece. The calendar continues for two new events in Romania and Andorra, before heading for the finale in France.

The 2011 World Championship Enduro Calendar dates are listed below: