2 KTM Launches X-BOW Superlight and ROC in Geneva
Car video reviews:
Up Next 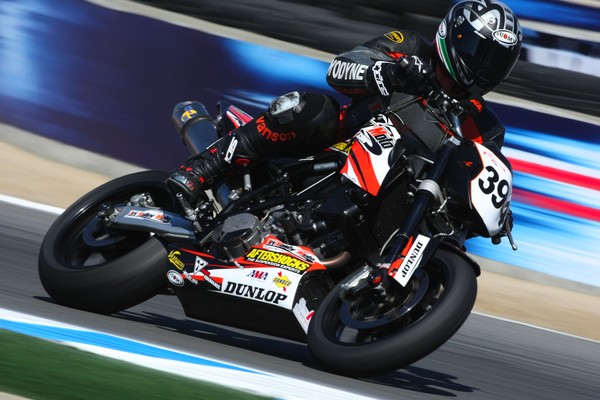 It was a successful weekend for the #394 ride of Eric Gulbransen as he became the first man in history to race a KTM 990 Super Duke in the AMA Pro Daytona SportBike class.

The motorcycle’s racing debut came after it was announced that it has been approved to serve as the 11th ride eligible to compete in the AMA Pro Daytona SportBike class.

Gulbransen finished 28th of 44 riders on a stock bike, proving that KTM 990 Super Duke can be considered highly competitive.

"The stock 990 Super Duke was amazing. The bike is impressive in the corners and allowed me to make up time I lost from being underpowered on a stock bike on the up hill," Gulbransen stated after the race.

"We were swamped by fans all weekend long and even barbecued with some of them in the pits. We spent hours telling Super Duke stories and were amazed to see AMA officials wearing KTM "Ready to Race" stickers on their pit shirts. Turn workers cheered alongside the fans for our KTM rider as we took the checkered flag in qualifying," said pit boss, Michael Meissner of Tri-Valley Moto.

The two-in-one exhaust header, plus the under-the-seat silencers of brushed stainless steel with a three-way catalytic converter help ensure excellent performance and a sporty sound.

The Brembo single-piston, floating brake caliper with a 240 mm brake disc at the rear, plus a 320 mm double disc up front featuring a 4-piston fixed-caliper and four individual pads per side are combined with radial hand-brake armature.