2 KTM Announces 2022 350 EXC-F With Factory Racing Treatment, Is Ready to Tackle Any Terrain

4 2022 KTM RC 200 Has a Fresh Style, Gets Race-Inspired Bodywork and Brand-New Features

World's Fastest Electric Motorcycle Has Been Upgraded, Wants to Break Its Own Records

Dragos Chitulescu
If you could go back in time, say 20 years, and ask someone if they knew what a viral video was, what do you think they would answer? What's the first viral video that comes to mind if you think about it? Chances are that you'll instantly remember Ken Block's Gymkhana, which was launched more than a decade ago.
11 photos

Some say that Ken Block's success is built on the back of the Gymkhana series, as these videos have been seen by hundreds of millions of people around the world. And many have tried to replicate his success, one way or another. Over the years, I've seen at least a few dozen attempts at creating potentially viral videos. Some have been more successful than others. And it hasn't been uncommon for high-budget productions to be outperformed by low-quality ones.

For example, "Moscow Drift" was a very cool little video shot about 10 years ago, showcasing underground drifting action on the streets of the Russian capital. It only went up to about 2 million views on Youtube. Meanwhile, a girl whose shirt was unbuttoned while being a passenger in the Evil Empire drift-spec Toyota Supra scored millions more. At the same time, basic quality footage of Giorgi Tevzadze drifting on the streets gathered a worldwide following with over 100 million views.

But what about motorcycle-related videos? Do you remember any good, viral ones? Icon's "Motorcycle vs Car drift battle 2" is probably one of the most successful of all time, even though it was launched almost 10 years ago. But have you heard about "Ride and Slay"? About four years ago, Rok Bagoroš, an official KTM stunt-rider from Slovenia, released this video, which featured a series of high-intensity action shots and some whacky characters.

Rok calls himself a pro freestyle street bike rider, having started on motorcycles when he was 17 years old. He went pro after just four years, and he has been putting on shows in Europe, Asia, South America, and the Middle East ever since. Watching his videos, you can tell that he can pretty much do anything on two wheels, including drifting, wheelies, stoppies, and all kinds of crazy stunts.

It doesn't come as a shock that some of his idols include Ken Block and Chris Pfeifer. After "Ride and Slay," he always thought of coming back with another viral video. Today he just launched "Motorcycle Drift Mania," a well-executed visual project, with plenty of breath-taking stunts included. There's even a little story included to make things more excited, and it all leads to something you've probably never seen before.

The project was shot in a wood processing facility, which he describes as a "sawmill playground." He's been riding KTM bikes for several years now, and of course, this video would make no exception. His weapon of choice is the KTM 1290 Super Duke R Evo, which is, without doubt, one of the most insane street-legal motorcycles money can buy today. And by the time you get to the end of the movie, it becomes obvious why he was in such a rush all along. He decides to help a friend process some wood faster by transforming his KTM into a 180-hp power saw! 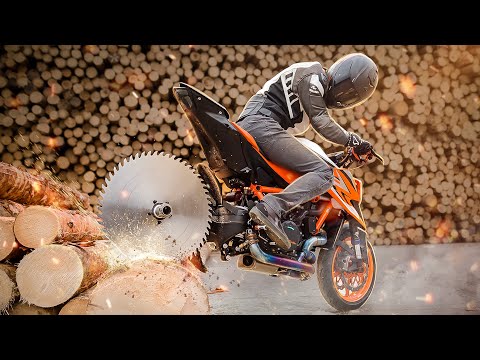 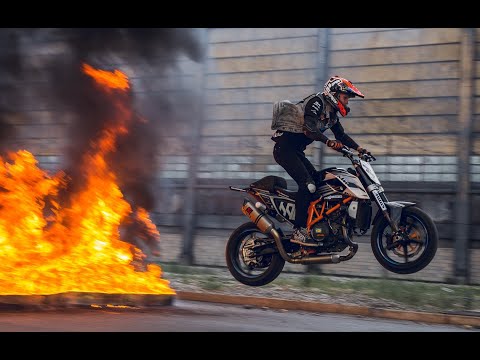