5 Koenigsegg Teases New Agera RS with Drawing of a New Wing ahead of Geneva
Car video reviews:
Up Next

When Christian von Koenigsegg said that he doesn’t like ‘normal’ hybrids earlier this week we wondered what the hell he was on about. As the Geneva Motor Show creeped in we got to see exactly what his words meant when the veils were pulled off his latest creation: the Regera.
15 photos

What we have here then could as well be counted as the world’s fastest car ever put in production even though no official attempt to write its name in the Guiness Book of Records was done so far. So, what are we looking at then?

Well, this is a hybrid all right but it does things in its own way. The 5-liter V8 biturbo plant from the Agera R, S and RS was kept on but it is now joined by three electric motors as well that have a more than important job to do.

The total output is rated at 1,500 BHP (1,521 HP) and over 2,000 Nm of torque (1,475 lb-ft) of torque that is divided into 1,100 HP coming in from the 5-liter internal combustion engine along with 1,250 Nm (922 lb-ft) of torque along with 700 HP and 900 Nm (663 lb-ft) of torque from the electric motors.Introducing Koenigsegg Direct Drive
The whole ‘not normal hybrid’ thing of Christian is reduced to the Koenigsegg Direct Drive system. Basically, the man wanted his car to be silky smooth and remove gearshifts as much as possible. Therefore, he created a direct hydraulic coupling for the ICE that basically works as a single gear box that sends the power to the rear wheels.

How does it work? Well, the car starts off from a halt using the electric motors alone that are each powering a wheel on the rear axle. The third one also acts like a starter and once the car is on the roll, as it reaches higher speeds, the hydraulic coupling starts to engage, sending power from the combustion plant to the rear axle as well.

It might seem crazy but the numbers Koenigsegg provided are simply stunning:

Impressed yet? Oh, and we haven’t even talked about the design and all the other crazy features such as the world’s first fully foldable top mounted active rear wing, the Akrapovic exhaust, the 9 kWh battery or the 1,420 kg (3,130 lbs) dry weight... This is an absolutely out of this world vehicle. 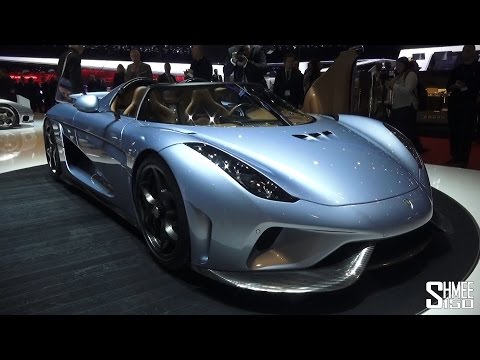 UPDATE: we added some live photos of the car straight from the Geneva Motor Show and they simply don't do justice to this MegaWatt hypercar... This thing is insane!