3 Lightyear Receives Koenigsegg Investment; Will Use Its Tech on the Lightyear 2

5 2023 Koenigsegg Gemera Hits the "Used" Car Market in the U.S., and It's Not a Build Slot
Car video reviews:
Up Next

Were it not for the branding under the door mirrors, it could easily be mistaken for the car from the dawn of the third millennium. CC850 by Koenigsegg is a throwback to the future of hypercars. Its silhouette brings back memories of when Sweden first took the automotive world by storm. But, just like the CC8S of 2002, the newest member of the Swedish exclusivist car-making family is a piece of tech witchcraft.

Face to face and looked at from the side, the resemblance between the CC850 and the CC8S is uncanny. The flowlines are almost identical, the wheels, the hardtop arches, the side air intakes – everything distracts the viewer into believing the 2022 car is a facelift of the 2002 model. But this latest addition to the breed is an all-in-all feat of Koenigsegg-ceptionality.

The 5.0-liter V8, with its pair of "smaller turbos" (Christian von Koenigsegg's wording), is a pure thoroughbred hypercar-level power player. 1385 hp (1404 ps) is no minor deal. But here is the surreal part. Koenigsegg decided to stick a manual gearbox to that engine.

Let us clarify this mystery. The car has an automatic gearbox with nine gears, which goes from A/T to M/T drive with the flick of a lever. And that means full manual: no paddle shifter behind the wheel, no up-down lever. None of that. It's a nostalgic H-pattern with a clutch pedal and a stick between the seats. But in manual mode, you only have six of the nine gears available.

To add to the magic, you can choose the gear ratios you want in manual mode. Koenigsegg's founder explains it in full detail in the video below. Still, the bottom line is this: select one of the Wet/Normal/Track driving modes, press the clutch pedal, put the lever in first, and drive off. Check the photo gallery for a glimpse at the massive pedals.

Depending on the desired handling mode, the manual's first gear is either the automatic's third or second gear. This enables a context-dependent behavior of the hypercar. You're going for a lap record and need vast acceleration coming out of a tight corner. The gear ratios are lower, and acceleration is quicker at the expense of the more frequent gear changes.

When in Normal mode, you don't necessarily want to shift as often as on the track, so gear ratios are correspondently higher. And when you feel you're done with the manual option, push the lever far away to the right, pull back to engage D for drive, and it is in full automatic rapid fire.

Koenigsegg has put a name on its highly intricate open-gate manual shift assembly – Koenigsegg Engage Shifter System – KESS. Many of its details are revealed in the video as well. This new twist to the old manual has spawned a nickname acronym for the CC850: TWMPAFMPC. Try saying it in under a second on the first go. Neither could I — The World's Most Powerful And Fastest Manual Production Car. Catchy.

Manual and analog as it may be, you can't simply shift from sixth to third when the engine revs at 8.500 RPM (that is the redline, yes!). No, the car is equipped with a gearbox protection system. It ensures you can only shift like in a regular manual, observing the correct engine and gearbox functioning.

The automatic mode harbors the Light Speed Transmission (LST) and Ultimate Power On Demand (UPOD) assembly. The LST is the lag-less innovation that allows the car to engage any gear without losing time or power. Say you're in eighth gear, and you suddenly need lots of power instantly. The UPOD kicks in and selects the optimal gear, which would happen to be third in our scenario. The car shifts from 8th to 3rd without passing through the five intermediary stages.

Traditionally, the detachable hardtop is stowed under the hood. Yet, there is a lot of space between the rear wheels. So much space, in fact, that Koenigsegg plans to put a trunk in future CC850s. For a car with a ride height of just 2 inches and a power-to-weight ratio of one thousand BHP/ton, luggage space at the rear is just another proof of solid Swedish car design. The car's full specs sheet is available at the bottom of this story. 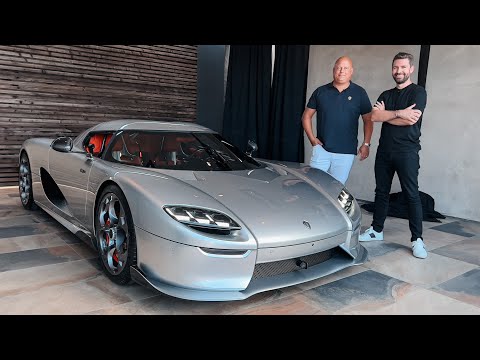