Gabriel Nica
Looking at the specs the Porsche 918 Spyder boasts with on paper you’d have to think long and hard about a car that would actually make it sweat in a drag race. Unless you’re really good with Swedish cars you’ll be working twice as hard to find a worthy rival. That’s right, if you’re a car connoisseur you already know what we’re talking about.
1 photo
The Koenigsegg Agera R is one of the fastest cars in the world right now, even though it’s almost 4 years old by now. The acceleration time up to 62 mph (100 km/h) for this hardcore Swede sits at 2.8 seconds while its top speed is way up in the 270 mph region, 273 to be more precise (440 km/h).

How is that even possible? Well, you have to take a look at what the Agera brings to the table. Its drag coefficient sits at 0.37 normally and goes down to 0.33 thanks to its active rear wing which, simply put, is the least impressive feat of the car, considering that Mercedes-Benz’s V-Class has a 0.31 coefficient and that’s a van!

On the other hand, the body of the hypercar is made of carbon fiber and has a monocoque chassis that was created in such a way that it reaches maximum stiffness without a roof. That makes the Agera R tip the scale at 1,330 kg (2932 lbs) despite housing a 5-liter twin-turbo engine under the .... bonnet.

The Agera R has held 6 world records for land speeds at one point, including the fastest sprint to 300 km/h (186 mph) done in just 14.53 seconds. It’s still the fastest car to reach that speed and then decelerate to a complete stop, a feat that takes just 21.19 seconds.

On the other hand we have one of the most praised cars of the 21st century. The hypercar from Porsche is what everyone’s been talking about lately alongside the McLaren P1 and Ferrari LaFerrari. That’s because it’s a hybrid that will keep up with the fastest cars in the world but also emit little to no CO2 around town.

In standard guise, the numbers of the Porsche are stunning. The weight is higher than the one of the Agera but that’s understandable as it also has to carry around an electric motor and batteries for it.

What we have here is not a standard model, however, but one fitted with the Weissach package. That means it has a lower weight than the stock one and more power.

Well, the Porsche has less power and a heavier weight than the Agera R but miracles have happened before. Interstingly enough, the 918 is faster from a standstill thanks to its all-wheel drive setup with a 0-62 mph (100 km/h) sprint that takes 0.3 seconds less than in the Agera. However this is a rolling start drag race and that might matter less over here.

Either way, it's pretty clear that we're dealing with the best in the field here. The two cars are absolutely stunning and even though the Porsche saves (some) trees, we still love both of them equally for what they represent from a technical point of view. 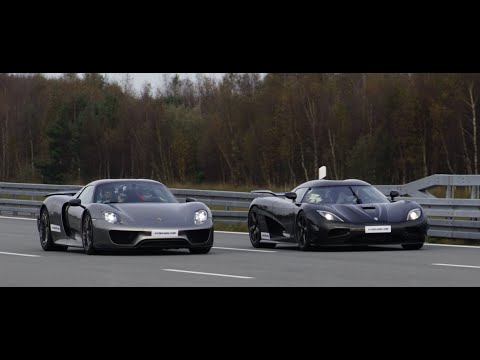